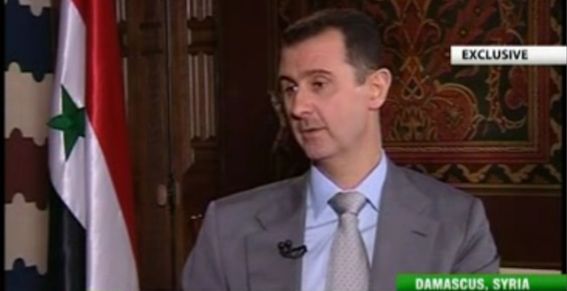 Excerpts of an interview with President Assad aired by Russia Today showed the president remaining steadfast to his position of remaining in power as bloodshed continues to engulf the country and the opposition group Syrian National Council (SNC) meets in Qatar to elect its general secretariat.
President Assad insisted that he will remain in the country because “I was made in Syria, I have to live in Syria and die in Syria;” defying calls for him to leave. The rebels have called on the international community to help in the ousting of the Syrian leader but Assad warned of unimaginable consequences against foreign intervention. He said such a move will lead to global consequences and regional instability as the war starts going beyond its borders. According to him, Syria is the “last stronghold of secularism and stability in the region” and a foreign intervention “will affect the world from the Atlantic to the Pacific.”
Countries such as England have assured Assad of a safe passage from the country but have not ruled our persecution. In the interview, Assad was quoted saying “”I am not a puppet. I was not made by the West to go to the West or to any other country,” as a reminder and warning to countries interfering in its affairs.
The UN Security Council is divided over the Syria crisis and humanitarian groups say the situation is getting worse. The observatory says more than 37,000 people have died since the uprising against Assad erupted in March 2011, first as a protest movement, and then an armed rebellion after the regime cracked down on demonstrations.
The division within the opposition groups is weighing heavily on their ambitions as the Syrian regime continues to enjoy the support of the Russia and China.