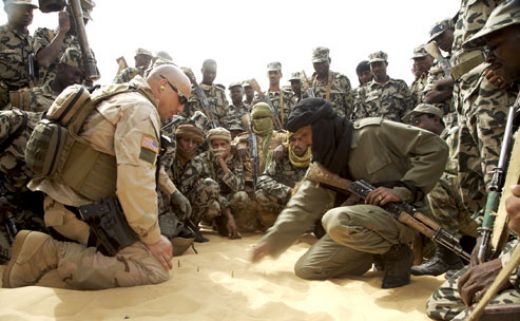 Washington is facing an acute dilemma as the threat posed by al-Qaeda in the Islamic Maghreb (AQIM) to the entire region and to the whole world is growing: should it help the countries of the region confront the group or should it intervene directly and launch strikes on this Al Qaeda’s offshoot in North Africa?
According to the US widely circulated daily the Washington Post, a series of secret meetings, involving White House counterterrorism adviser John O. Brennan and top officials from the CIA, State Department and Pentagon, were held in recent months “to examine the threat posed by al-Qaeda’s franchise in North Africa and consider for the first time whether to prepare for unilateral strikes.”
The deliberations reflect concern that al-Qaeda’s African affiliate has become more dangerous since gaining control of large pockets of territory in Mali and acquiring weapons from post-revolution Libya, the Washington post noted.
“The discussions have focused on ways to help regional militaries confront al-Qaeda but have also explored the possibility of direct U.S. intervention if the terrorist group continues unchecked,” the daily said quoting U.S. officials.
According to these officials, no decisions have been made about deploying armed drones or other lethal assets and that unilateral strikes would be considered “only as a last resort.”
In the meantime, the administration has been stepping up its military aid to Mali’s neighbors, the Washington Post said recalling that in July, the Defense Department allocated $6.9 million worth of military trucks, uniforms and communications gear for Mauritania and that it also agreed to give Niger $11.6 million in equipment, primarily in the form of two Cessna airplanes that can be used for surveillance and to transport troops.
The daily which recalled that Army Gen. Carter F. Ham, chief of U.S. Africa Command (Africom) has visited in recent weeks the countries that could become part of a peacekeeping force for Mali, said Gen. Ham said last Friday during a visit to Morocco that there “are no plans for U.S. direct military intervention” in Mali.
However, according to Gen. Ham and other U.S. officials, Washington is prepared to support counterterrorism or peacekeeping operations by other countries.
In another development, a senior State Department official, Johnnie Carson, was quoted by the media as saying on Monday that the United States was ready to support military intervention in northern Mali to dislodge armed Islamist groups linked to Al-Qaeda. However, if Washington seems to give the green light to a potential military operation, it is under the condition that the troops deployment be “well prepared” and led by African countries.
“At some point, there should be military action against the extremists linked to AQIM in northern Mali,” Johnnie Carson said. The U.S. are for the deployment of troops from the Community of West African States (ECOWAS), under the banner of the UN, the Us diplomat said adding the troops should be led by the Malian army, with the support of all the States of the region.
For its part, NATO said that intervention in Mali was not on the agenda while Paris and Berlin have expressed their willingness to support the intervention by a “logistical support”.
The Washington Post also reported that the U.S. military has launched a series of clandestine intelligence missions, including the use of civilian aircraft to conduct surveillance flights and monitor communications over the Sahara Desert and the arid region to the south, known as the Sahel.
According to the daily, some counterterrorism experts do not share the administration’s worries as to the threat posed by al-Qaeda in North Africa arguing that the group was for years known among analysts as “the most underperforming affiliate of al-Qaeda.”
Gen. Ham has however described AQIM as the “best-funded, wealthiest” Al Qaeda affiliate, “thanks to its lucrative practice of kidnapping foreigners for ransom and its smuggling prowess,” the daily said, recalling that during a visit to Senegal in July, AFRICOM chief had said that the United States, the Malian government and other countries “missed an opportunity to deal with AQIM when they were weak.”