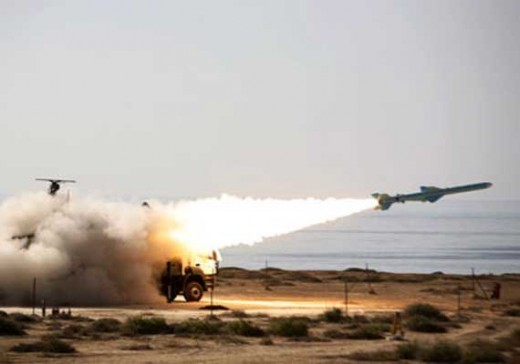 As the exchange of threats and warnings continue to mar the relations between Iran and countries against its nuclear program, especially the US and Israel, an upgraded version of military weapons have been unveiled at a ceremony in honor of the Defense Industry Day with the President and Defense Minister present.
Among the new versions were a short range surface-to-surface ballistic missile and a more powerful naval engine of 5,000-horsepower sea-borne engine, the Bonyan-4.  Armita, an “airborne laboratory” to help test aircraft launch systems and oxygen generation and train fighter pilots was also presented. The new version of the ballistic missile, the Fateh-110 or Conqueror is dubbed to be more accurate compared to its predecessors as Iran remains steadfast to the politics of dissuasion against an attack on its nuclear facilities as Israel continues to weigh on an air strike that might result in a thirty day war.
Speaking at the ceremony, President Ahmadinejad said they were seeking “for progress in the defense industry… to defend ourselves, our territory, our existence… and human dignity.” He added that there progress “can stand up to bullying and put a halt to their plans.”
Iran maintains that its nuclear program is for peaceful purposes and has warned that it could hit Israel and US bases in the region if it comes under attack while threatening to also block one of the world’s vital oil export route, the Strait of Hormuz. The blockage of the latter will most likely result to a military assault from the US which continues to increase its number of troops in the region.
Experts have questioned the potentials of Iran’s military advancement. They accuse officials of exaggeration.