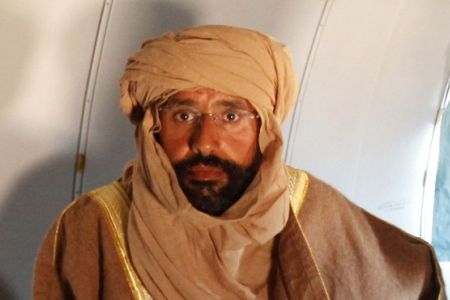 The late Libyan dictator’s son, Saif al-Islam, accused of inciting his followers to kill demonstrators and revolutionaries, will be sent to court in September, according to an official in the prosecutor general’s office.
The trial will take place in the mountainous city of Zintan instead of Tripoli as previously decided by the National Transitional Council. Libya’s new rulers cited security reasons behind the change of the trial venue.
The new rulers still fear a terrorist campaign by Gaddafi loyalists, hundreds of whom escaped to Egypt and Algeria with billions of stolen dollars. The Gaddafi loyalists have been blamed for bomb attacks and plots in recent weeks.
Three Libyan judges will hear the case, which is expected to last for up to six months. According to press reports, the prosecutors have evidence including phone intercepts, video clips , documents and witness statements as well as his own declarations on television stations during the revolution, substantiating the charges against Saif  al-Islam, who is facing the death penalty if found guilty.
The defendant had requested to be tried at the International Criminal Court (ICC) in The Hague, but Libyan authorities have turned out the request making it clear that the ICC will play no role in the trial.
The decision to send Saif al-Islam to court was made after the Libyan newly-elected government struck a deal with the independent militia which caught him while he was trying to escape across the desert last November.
The official of the prosecutor-general’s office, Taha Naser Bara, told The Sunday Telegraph that the evidence against Saif Al-Islam is solid and that Libya is capable of holding a fair trial.
A second and separate investigation is still under way into Saif’s alleged corruption, which may lead to further charges.