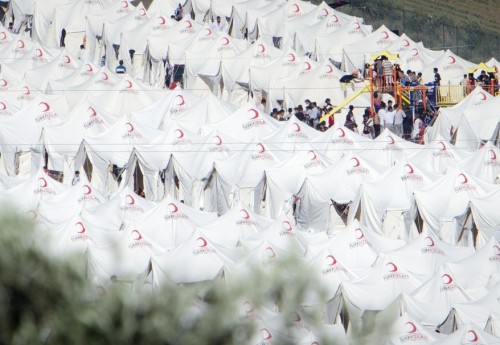 The influx of refugees continues as the tension between government forces and the rebels is far from ending. This number of refugees in Algeria may be attributed to the lack of visa requirements between the two countries. The country has set up reception centers across the capital, Algiers, tasked with providing assistance to the refugees. Places like Port-Said Square are a good example.

The Algerian government has decided to take care of the Syrian nationals on its territory after several inter-agency meetings of coordination.  The decision came after the examination and approval of the humanitarian solutions and recommendations made by the inter-ministerial committee by the Ministry of Interior and Local Authorities and the Ministry of National Solidarity and Family regarding the refugees.

According to the spokesman of the foreign Ministry, “the Syrian nationals who are currently in our country, I confirm that this issue is handled by the Algerian authorities and it was an object of several inter-ministerial meetings of coordination.” He continued to say that it was their duty to stand beside Syrians and provide them with needed support and assistance through state agents especially that of the Ministry of National Solidarity and Family and the Algerian Red Cross as they are already present on the ground.

For the time being, accommodation and necessary nutrition requirements for the homeless is being taken care of by the Wilayas in collaboration with the Police force, Civil Defense, Red Cross, Boy Scouts and civil society organizations as other steps are yet to be announced by the government.

The refugees have shown their appreciation to the efforts of the authorities although they plead that more has to be done as the number continues to increase with only a few having the means to assure themselves of a decent live away from their homeland that they left with fears for their lives.