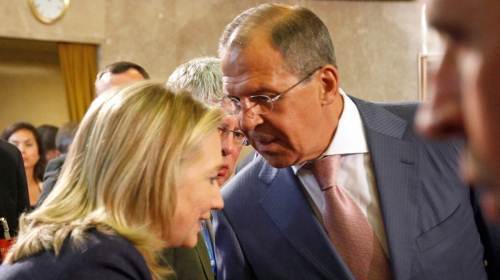 A transitional Syrian government has been agreed upon by world powers at the Geneva talks. This plan is seen as the final solution to remedy the 16 month long crisis after the failure of Kofi Annan’s peace plan.
The new proposal ought’s for a transitional government made up of members from the government, opposition and other groups under the “basis of mutual consent” therefore raising concerns that there is a still a possibility for Assad to remain in power; which is against the wish of opposition parties.
The Local Coordination Committees of Syria, an opposition organization, in a Final Communiqué, contains a “vague language which is open to interpretation” and gives the regime supplement time to continue its atrocities while the Syrian National Council felt that it “might give (encouraging) signs and gestures” to Assad’s government legitimacy despite its actions before describing the Final Communiqué as a “permit to continue killing and spilling more Syrian blood.”  The US has said that “Assad will not be part of it”. This has been seconded by Kofi Annan when he also raised doubts about Syrians choosing “people with blood on their hands to lead them” after all their endured hardships. However, opposition groups applauded the communiqué for containing “a few positive elements.”
The newspaper of the ruling party, Al-Baath, said the meeting was a failure and compared it to “an enlarged meeting of the U.N. Security Council where the positions of participants remained the same.”
Russia said it was “delighted” that there will be no foreign interference.
Turkey has scrambled six F-16 fighter jets near its border with Syria after Syrian helicopters came close to the border but there were no crossings as the helicopters were 6.5 kilometres away from the boundary amid increasing tensions.