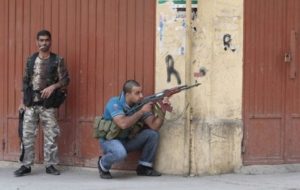 ADDS CAPTION INFORMATION–
Lebanese Sunni Muslims gunmen are seen during fighting in the Bab al-Tebbaneh neighbourhood of the northern Lebanese city of Tripoli after clashes broke out between factions supporting and opposed to the revolt in Syria on May 13, 2012. A man was killed in the clashes between residents of the predominantly Sunni Muslim Bab al-Tebbaneh district, hostile to the Syrian regime, and residents of the Jabal Mohsen district belonging to Syrian President Bashar al-Assad’s Alawite community, a source in the security forces said. AFP PHOTO / STR