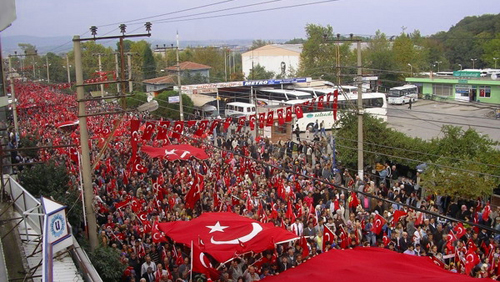 Turkey’s has started drafting a new constitution aimed at consolidating the Ottoman state’s democracy and good governance to break its link with past military experiences. The current military constitution is criticized of restraining freedom. The new one will be making the citizen as the centre stage rather than the state. The civil society has been called upon to participate in the process. However, the Prime Minister’s ambition of turning Turkey into a presidential state wherein the president will be a powerful figure is likely to be met with unwelcomed reactions in a country with a powerful parliament. Although his party has the majority to pass such bill for a referendum, it is widely feared that such a move will divide the country instead of uniting it. The Prime Minister’s third term in office will come to an end in 2015.
Turkey is also embarking on a new strategy geared towards limiting terrorist activities on its territory and the region at large. It is now taking a firm stance at limiting the finances of the Kurdish Workers Party (PKK) in the country’s fight against terrorism. Data released by the Financial Crimes Investigation Board (MASAK) cited that the PKK took a “total of 28mTL from southeastern Kurdish people, under the name of ‘revolution tax’ in 2011”. Turkey believes that the Kurdish businesses and some municipalities under the control of Kurdish Peace and Democracy Party (BDP), the Kurdish in the Diaspora coupled with trafficking and smuggling operations provide a huge chunk of the PKK’s financial needs. PKK claims that they don’t obtain money through force contrary to the investigations of the Department of Anti –Smuggling and Organized Crime (KOM) which concluded that they extorts businessmen in the east and southeast regions who have won state tender bids.