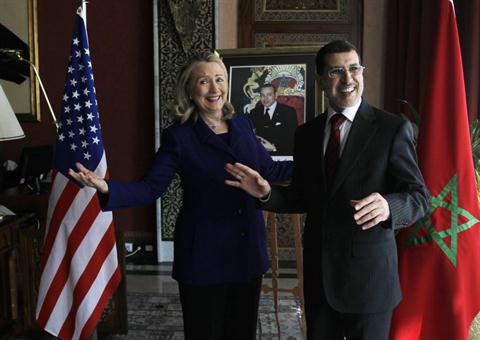 U.S. Secretary of State, Hillary Clinton, has visited Tunisia, Algeria and Morocco (24-26 Feb.) to boost the U.S. longstanding relations and strategic partnership with Maghreb countries as the winds of changes and Arab Spring are sweeping across the whole region.
The trip comes after new Islamist-led governments were formed in Morocco and Tunisia which was the first Arab nation to topple long-time autocrat regime.
In Tunis, Algiers or Rabat, Mme Clinton met with political leaders, representatives of civil society, youth associations and private sector. Talks focused on U.S. economic support to the Maghreb, democratic transition, freedom, political reforms, military cooperation, counter-terrorism, Western Sahara and closed borders between Morocco and Algiers.
The challenges facing the region, the upcoming parliamentary elections in Algeria as well as the issue of good governance, women empowerment and the constitutional reforms ushered in Morocco were also reviewed.
“The people of the Maghreb are as talented, creative, and hard-working as people anywhere in the world”, Mme Clinton said. “They need and deserve the opportunity to make decisions on behalf of themselves, because that is good for the dignity and rights of every individual and it is good for every society”, she said.