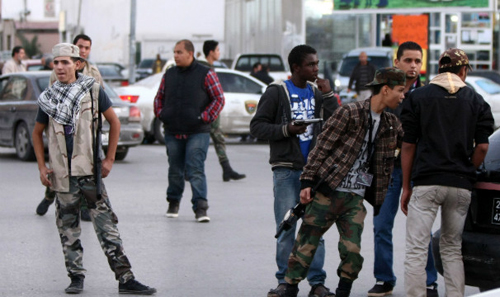 Armed militias deployed in Libya “are largely out of control and the blanket impunity they enjoy only encourages further abuses and perpetuates instability and insecurity,” says Amnesty International.
They commit widespread human rights abuses with impunity, threatening security and undermining the efforts of rebuilding state institutions, warns AI in a report on Libya.
“A year ago, Libyans risked their lives to demand justice. Today their hopes are being jeopardized by lawless armed militias who trample human rights with impunity”, says a senior AI advisor, stressing that “the only way to break with practices of decades of abuse under Gadhafi’s authoritarian rule is to ensure that nobody is above the law”.
According to AI report, serious abuses were committed by a multitude of militias against suspected al-Gaddafi loyalists. African migrants & refugees have also been targeted, and revenge attacks have been carried out while the authorities have done nothing to hold accountable those responsible for these abuses.