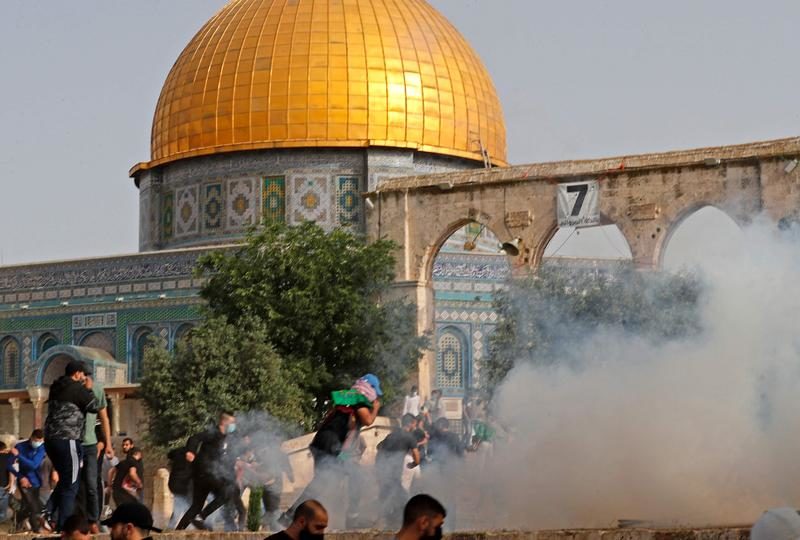 Several countries, including Morocco, Saudi Arabia, the UAE, the United States, and international organizations including the United Nations, the Organization of Islamic Cooperation, the Arab League, the European Union and the Gulf Cooperation Council have denounced the raid conducted by the Israeli occupation forces on Al Aqsa Mosque and expressed concern over the spate of violent incidents at the al-Aqsa compound.

In a statement by the Foreign Ministry, Morocco strongly condemned the Israeli raid on the Al Aqsa Mosque, the closing of the shrine’s gates and the attack on unarmed worshipers in the mosque compound, causing many injuries.

“This blatant aggression and methodical provocation during the holy month of Ramadan against the sanctity of the mosque and its place in the heart of the Islamic Ummah will only fuel feelings of hatred and extremism and destroy the chances of reviving the peace process in the region,” the Moroccan Foreign Ministry said.

Morocco, whose King Mohammed VI chairs the Al Quds Committee of the Organization of Islamic Cooperation, calls on the United Nations and the international community to intervene urgently to put an end to these violations and assaults against the defenseless Palestinian people and its sacred values, the statement said, adding that upon the Sovereign’s instructions, Morocco’s condemnation and denunciation were communicated directly to the head of the Israeli liaison office in Rabat.

According to media reports, more than 200 people were injured in clashes between Palestinians, and Israeli police on Friday.

The Palestine Red Crescent said most of the Palestinian injuries came from rubber bullets, stun grenades and police batons, whilst Israeli police reported injuries to three officers, as a result of stone-throwing.

In a message released by his spokesperson, Stéphane Dujarric, UN Secretary General Antonio Guterres called on leaders on all sides to help calm the deteriorating situation, and insisted that “provocations” on the Holy Esplanade must stop immediately, to prevent further escalation.

The status quo at the holy sites in Jerusalem, he said, must be upheld and respected.

The Secretary-General reiterated his commitment to supporting Palestinians and Israelis to resolve the conflict, on the basis of relevant United Nations resolutions, international law, and bilateral agreements.

The OIC has also condemned the Israelis’ incursion into the sacred mosque and their assault on worshippers, saying “this dangerous escalation is an affront to the feelings of the entire Muslim Ummah and a blatant violation of international resolutions and instruments”.

The Islamic Organization held the Israeli occupation fully responsible “for the fallout of such daily crimes and offenses against the Palestinian people, their territories and sanctuaries.”

The Secretary-General of the Gulf Cooperation Council, Naif Falah, strongly condemned the attack, calling it a “dangerous escalation.”

He stressed the importance for Israel to respect the historic and legal status of Jerusalem and its holy sites.

Similar statements were issued by the foreign ministries of others countries, including Saudi Arabia, the UAE, Qatar, and Egypt, who condemned the attack and renewed their commitment to the Palestinian cause.

“The EU calls on the authorities to act urgently to de-escalate the current tensions in Jerusalem.”

The statement added that “acts of incitement around the Temple Mount/Haram al-Sharif must be avoided and the status quo has to be respected.”

In the same connection, the State Department’s Spokesman Ned Price said the United States is deeply concerned by the violence in Jerusalem on the Haram al-Sharif/Temple Mount.

“We call on all sides to exercise restraint, avoid provocative actions and rhetoric, and preserve the historic status quo on the Haram al-Sharif/Temple Mount. We urge Palestinian and Israeli officials to work cooperatively to lower tensions and ensure the safety of everyone,” he said in a statement.

The State Department is closely following developments and will continue to be in close contact with senior Israeli and Palestinian officials to seek to deescalate tensions, he added.