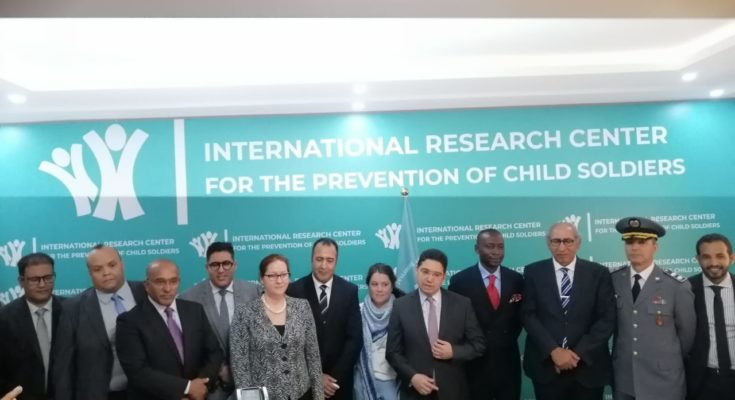 The International Centre for Research on the Prevention of Child Soldiers was inaugurated Thursday in Dakhla, with the aim of contributing to the fight against the recruitment of child soldiers, through the dissemination of research to be carried out by the Centre.

The objective of the institution is to raise awareness, in particular, to the fate of child soldiers, the processes of their enlistment, as well as the underlying causes that fuel the persistence of this scourge.

This structure also seeks to provide accurate, qualitative and quantitative data in order to carry out an action based on academic research.

The Centre will focus its missions on studies, research and consultations on the prevention and exploitation of children in conflict zones, the head of the centre Abdelkader Filali,

Mr. Filali, professor at the University of Ottawa, noted that this structure will be equipped with mechanisms for international advocacy within United Nations organizations in the various fora, in collaboration with civil society around the world and civil authorities working in this area.

This Research Centre gathers executives, academics and university graduates who will have at their disposal mechanisms for monitoring the various violations in conflict zones around the world.

In order to address the vulnerability of children who are exploited and used in armed conflicts, the International Centre for Research on the Prevention of Child Soldiers will join efforts with United Nations agencies, international and regional organizations, international networks and civil society to develop a common research program.

Through academic research, partnerships and collaborations, the Centre will deploy strategies to deal with all forms of enlistment of children and conduct an assessment and census of unregistered child soldiers, while offering innovative solutions to combat their exploitation in armed conflicts.

The Centre will also focus on research on the African continent, with the aim of disseminating data on a large scale.

The opening ceremony of the centre took place in the presence of the Foreign Ministers of Morocco, Nasser Bourita, of Gambia, Mamadou Tangara, and of the Union of the Comoros, Dhoihir Dhoulkamal, as well as the Deputy Foreign Minister of Somalia, Mahmoud Abdi Hassan, and the Secretary of State for International Cooperation of Guinea-Bissau, Udé Fati.

At a conference organized by the centre the same day, Moroccan Foreign Minister Nasser Bourita warned that the recruitment of children in the camps of Tindouf by the Algeria-backed polisario fuels instability in North Africa and the Sahel.

Bourita, who stressed the correlation between the lack of proper management of the Tindouf camps and the recruitment of child soldiers, noted that the host country must assume the full extent of its international responsibility, including the safety and protection of children living on its territory.

The indoctrination and enlistment of children by the polisario armed militia is an inhuman crime, and a denial of the basic rights of the children recruited, as well as a flagrant violation of the resolutions adopted by the Security Council on this matter, he said.

The Minister also deplored the increasing proportion of children living in conflict zones who are at risk of recruitment and use by armed groups, saying their number has tripled from less than 5% in 1990 (99 million children) to more than 14% in 2020 (337 million children).

“The problem of child soldiers is neither marginal nor circumstantial and contrary to popular belief, this phenomenon is not exclusive to Africa,” he added, noting that children take part in 75% of conflicts in the world, more than 460 million children live in a conflict zone in 2022 and more than 15% of child soldiers are girls.