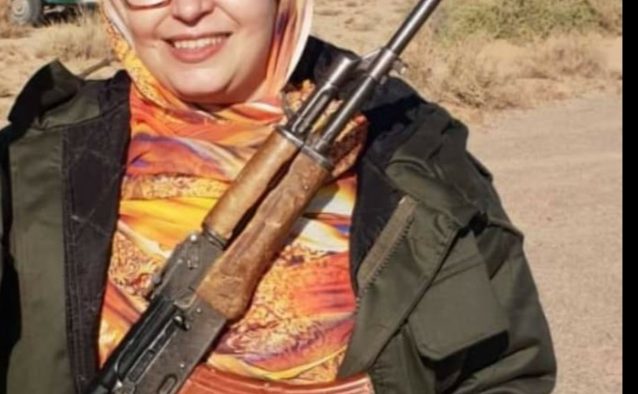 The true nature of the so-called Sahraoui defender of human rights Sultana Khaya has been unveiled and her lies and allegations have been laid bare by the Special Rapporteur on the situation of human rights defenders, Mary Lawlor.

Actually, the Special Rapporteur discovered the truth about the so-called human rights activist after she found and authenticated photos of her, shared by Internet users, wearing military fatigues and bearing a Kalashnikov.

The Irish Mary Lawlor, who had published on her twitter account a number of photos paying tribute to women activists, on the occasion of International Women’s Day, marked on March 8, immediately removed Sultana’s photo from her Twitter after the so-called activist’s scheme was unraveled.

The Special Rapporteur, outraged by the shocking photos of the woman smiling while exhibiting a weapon of war, decided to exclude the case of Sultana Khaya from her mandate, as confirmed by Mary Lawlor’s team.

This showed that that the pseudo-human rights activist is actually an agent who serves a separatist and destabilizing agenda fomented by the Algerian military junta and their puppet, the Polisario, against Morocco.

According to well-informed sources, Sultana Khaya receives instructions directly from the Polisario HQ in Rabouni and from the Algerian military intelligence services.

As a reward for her “services”, the Sahrawi collaborator receives extravagant presents from the ruling junta in Algeria, including a sumptuous apartment in the upscale neighborhood of Calle Angelita Rodríguez Preciado in Alicante, in southeastern Spain.

Living in this flat, Sultana was able to obtain residency permit in Spain and was even able to obtain the financial assistance provided by Spanish authorities to immigrants in a precarious situation, known as “AYUDA”.

As her greed has no limit, she deceived members of a Spanish association that supports the so-called Sahrawi cause, making them believe that she was renting the flat for €500 per month and that she could not pay the rent because of her financial situation. The subterfuge worked. Member of the association Angela Maria Carrillo Alvarez believed her and started paying her rent. Each month, she handed the amount to an Algerian citizen, Embark Daoud, who later on gave it to Sultana.

Sultana Khaya was also unveiled as a supporter of hatred and violence. The so-called human rights activist actually traveled often to Algeria and to the Tindouf camps to undergo indoctrination and propaganda training, and became infamous by her multiple calls, inciting violence against civilians in the Moroccan Sahara and acts of vandalism against public and private property.

The pseudo-peaceful activist has thus been unmasked and will certainly find it difficult to conceal any longer that her alleged activism is actually fueled by hatred and violence.