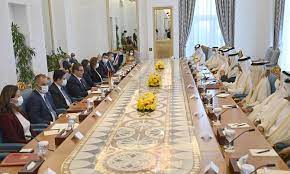 Morocco and Qatar have reiterated their solidarity with the Palestinian people and support to their right to establish their independent and sovereign state with East Al-Quds as its capital, in accordance with the relevant international resolutions.

The support was expressed in the minutes of the Moroccan-Qatari high joint commission which convened its 8th session in Doha on Monday.

The two sides called on the various parties and supporters of peace to break the stalemate in the peace process, and stressed that the continuation of the Palestinian-Israeli conflict will only exacerbate tensions and extremism in the region and be a source of threat to security and stability.

The commission hailed the continuous efforts made by King Mohammed VI, Chairman of the Al-Quds Committee, to defend Al-Quds Al-Sharif and its inhabitants and to safeguard its civilizational identity and preserve its position as a symbol of tolerance and coexistence between the different monotheistic religions, as well as the humanitarian and social projects implemented by Bayt Mal Al-Quds Al-Sharif Agency to settle the Maqdessis on their land and support their resistance.

During the session, co-chaired by the Qatari Prime Minister Sheikh Khalid Bin Khalifa Al Thani, and Morocco’s Head of Government Aziz Akhannouch, the two parties reiterated their commitment to joint Arab action, as a suitable framework to consolidate the foundations of stability and permanent development in the Arab region.

As stated in the minutes of the Commission, the two sides stressed the need to develop modes and mechanisms for Arab action in accordance with international economic developments and on the basis of solidarity and tangible cooperation to promote successful experiences and build together the future of Arab countries.

Regarding the security and economic conflicts and problems facing the Arab region and the rise of foreign interference, the Commission called for enabling the Arab countries to defend their unity and sovereignty and strengthen their security and stability, through defending the values of solidarity and neighborliness, and refraining from any interference in the internal affairs of countries and threatening their territorial integrity.

In this regard, the Commission expressed its hope that the crises suffered by brotherly Arab countries, such as Iraq, Syria, Yemen and Libya, will find political solutions that preserve their territorial and national integrity, guarantee their security and stability, and meet the aspirations of their peoples for development and freedom, in accordance with the relevant UN resolutions.

The Commission also condemned the continued targeting of civilian and economic facilities in Saudi Arabia and the United Arab Emirates, reaffirming its constant and continued solidarity with the two brotherly countries.

The Commission reiterated its condemnation of extremism and terrorism under all its forms, regardless of their justifications and motives, stressing that this dangerous scourge should not be linked to any civilization or religion.

In addition, the commission stressed the need to combine and coordinate regional and international efforts to confront and eradicate terrorism, and eliminate its causes.

The commission insisted that joint Arab action should be carried out in respect of the national sovereignty of States and their territorial integrity, emphasizing the importance of dialogue as a means to resolve Arab conflicts.

In this connection, Qatar reiterated its full support for Morocco’s territorial integrity and for the autonomy Initiative as the basis for the settlement of the artificial conflict over the Moroccan Sahara.

Any solution to this issue can only be achieved within the framework of Morocco’s sovereignty and the integrity of its territories, insisted the Qatari delegation.

The Commission also praised the significant progress made in the strategic partnership between Morocco and the Gulf Cooperation Council, calling for accelerating the development of its institutional framework and mechanisms.

The commission works highlighted by the signing of six agreements and memoranda of understanding in various sectors, including endowments and Islamic Affairs; tourism; trade; as well as financial control between the two countries’ audit agencies.