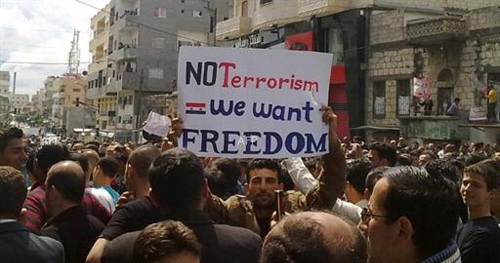 The Arab league has decided to boost the number of its observers deployed in Syria to see on the ground whether the Syrian regime is complying with an Arab peace plan meant to halt 10-months of deadly crackdown on anti-government protesters.
The League brokered initiative requires Syrian regime to pullout security forces and heavy weapons from city streets, open dialogue with the opposition, free political prisoners and allow human rights workers and journalists into the country.
In its first report on Arab monitors in Syria, the League says the observers will continue their work in country despite “harassment” and calls on the opposition and the government to let the mission move freely. Over 160 Arab monitors are now deployed in Syria and their number will be increased. They will also be supplied with more equipment and given more assistance.
In their report, the monitors said they saw military vehicles in most cities they visited and bodies on the street. They also confirmed the release of hundreds of prisoners but could verify whether they were political detainees. They took note of the steps made by Syrian authorities and condemned continuing acts of violence against civilians.
In a statement released, the Arab league renewed its call for Damascus to stop all acts of violence, protect civilians, free political detainees, remove tanks and weapons from cities, and let media to freely travel around the country.
The Syrian opposition and Human rights militants have criticized the Arab monitors mission saying it has failed to stop the killing of civilians and called for the withdrawal of the observers.