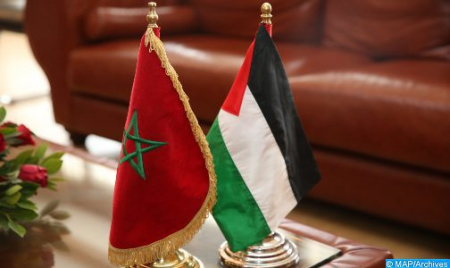 A conference held on Thursday in occupied Al-Quds highlighted the Moroccan thousand-year presence in the Holy City, and the long and distinguished historical relationship binding Moroccans to Al-Quds Asharif for over a thousand years.

The conference, organized by the Agency Bayt Mal Al Quds Asharif and Al Quds University, on the occasion of the first millennium of the Moroccan presence in the city, was attended by academics, historians, intellectuals, and heads of research centers, as well as students and Moroccans of Al-Quds.

In opening remarks, the Director in charge of the management of the Agency Bayt Mal Al Quds Asharif Mohamad Salem Cherkaoui, said that the Moroccan presence in Al-Quds is embedded by their ancestors and enshrined in these lands from Bab Al Maghariba to Harat (neighborhood) Al Maghariba, and through, today, the Moroccan cultural center, built on a historical real estate heritage in Al Alam Alley, in the heart of the ancient city of Al Quds.

“We are fortunate, we Moroccans, to be closer than others to Al Quds and Al Aqsa Mosque. It is also fortunate that our presence in this city is not affected by vicissitudes,” added Cherkaoui.

The Agency Bayt Mal Al Quds Asharif worked and is still working to safeguard some aspects of this presence by publishing specialized studies on Harat Al Maghariba, and “Rab’aa Al Maghribia” kept in the Islamic Museum of Al Aqsa Mosque, pointed out Cherkaoui.

He reaffirmed that Moroccans will remain faithful to the great heritage left by their ancestors in this Holy City, a civilization rooted for more than twelve centuries, and committed to the respect of the principles of pluralism, openness, and tolerance.

For his part, Nazmi Al-Jubeh, professor of history at Birzeit University, noted that the ongoing and influential Moroccan presence in Al Quds Asharif, which is entering its second millennium, dates back to the beginning of Islam, adding that this uninterrupted presence is synonymous with a qualitative leap in the relations that unites the Moroccans to Al-Quds.

The history professor outlined the various stages of the ongoing relationship of Moroccans with the Holy City until June 1967, when the Israeli occupation demolished Harat Al Maghariba, noting that following the destruction of this neighborhood, the majority of its residents remained and settled in other parts of the city, in addition to those who left the neighborhood during the Mamluk and Ottoman periods.