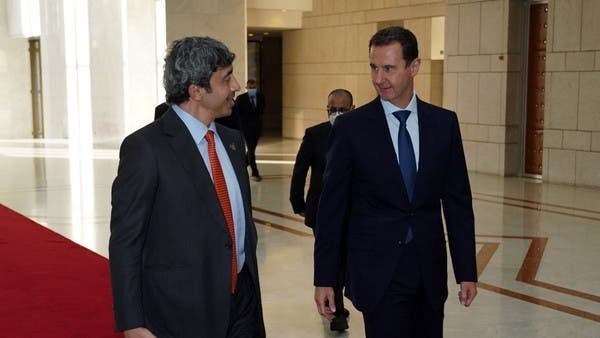 The U.S Tuesday vehemently warned against its allies in the Middle East thawing ties with Syria after UAE foreign minister visited the embattled Syrian leader Bashar al Assad.
Sheikh Abdullah bin Zayed led high key delegation of Emirati officials to meet with Assad. The visit is highest so far between the two countries since the Gulf country reopened its embassy in capital Damascus in December 2018.
The meeting, Syria’s state-run news agency SANA reported, dealt with bilateral relations between the two brotherly countries and the development of bilateral cooperation in various fields of common interest.
The Syrian leader also according to the agency spoke of “close brotherly relations” with the UAE and what he called “objective and correct stances adopted by the UAE, stressing that it has always stood by the Syrian people.”
In the reaction to the land-marking visit, the US State Department expressed its rejection of the move and called on its allies in the region to refrain from improving ties with the Syrian regime under US sanctions.
“This administration will not express any support for efforts to normalize or to rehabilitate Bashar Al-Assad, who is a brutal dictator,” Ned Price, spokesperson of the State Department told reporters.
“We urge states in the region to carefully consider the atrocities that this regime, that Bashar Al-Assad himself, has perpetrated on the Syrian people over the last decade, as well as the regime’s ongoing efforts to deny much of the country access to humanitarian aid and security,” he added.
Price also stressed that Washington will not back any efforts by its allies to upgrade ties with Bashar al Assad.
In June 2020, former US President Donald Trump’s administration warned Abu Dhabi of the repercussions of continued normalization, and the possibility of facing sanctions under the Caesar Act, reports say.
Several countries other UAE, namely Egypt, Jordan have also thawed ties with Syria. The next Arab League summit to be held in Algeria in March, will discuss the re-instatement of Syria in the organization.