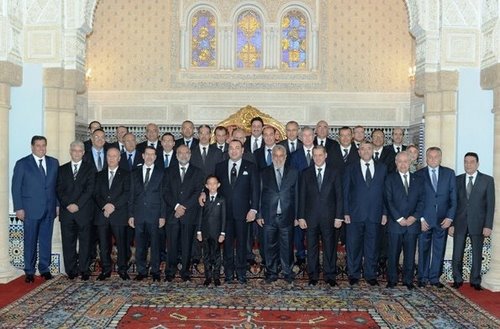 Morocco’s new Prime minister, Abdelilah Benkirane, leader of the moderate islamist Justice & Development Party (PJD), which won most seats in last novembre parliamentary elections, has unveiled his cabinet team after several weeks of laborious political consultations.
The 30-member cabinet includes 24 new faces and one woman. The PJD has taken 12 posts including the departments of foreign affairs, justice and communication, while other members of the ruling coalition (close allies to the palace) were given important positions.
The PJD has formed a coalition with the Istiqlal Party, which played key role in Morocco’s struggle to gain its independence from France in 1956, the Popular Movement and the Party of Progress & Socialism of former communists.
Morocco becomes hence the second Arab country after Tunisia to vote an Islamist party into power in the wake of the “Arab Spring” uprisings. Along with Ennahda in Tunisia and the Justice and Development Party (AKP) in Turkey, PJD places itself within a contemporary movement reconciling Islam and democracy.
Morocco’s new constitution gives parliament a greater role in the legislative process and strengthens the role of the prime minister. The electoral system in Morocco is based on a complex proportional system allowing no party to take more than 20 pc of the seats.
Moroccans pin high hopes on the new government to create jobs, reduce poverty, and improve education, health care, housing and social justice.