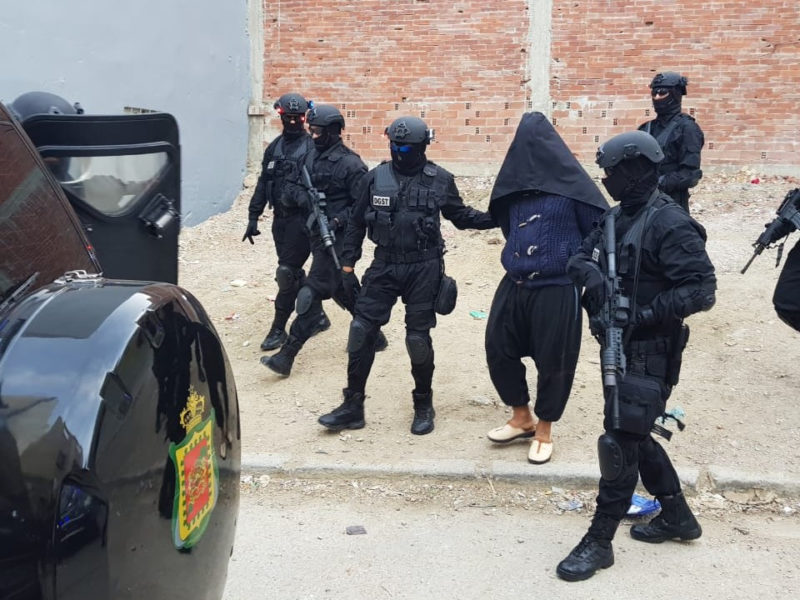 The Central Bureau of Judicial Investigations (BCIJ), on the basis of accurate information provided by the Directorate General of Territorial Surveillance (DGST), foiled in the early hours of Wednesday an imminent terrorist plan following the dismantling of an extremist cell operating in the city of Tangier, composed of 5 individuals aged between 22 and 28 years, who had pledged allegiance to the terrorist organization “Daesh”.

Dismantling this terrorist cell and foiling its extremist projects are part of the ongoing efforts of the DGST to fight terrorist organizations and neutralize the dangers and threats to the safety of the Kingdom and the security of citizens, said a statement by the BCIJ.

The intervention operations, conducted simultaneously in Tangier by the elements of the Special Force under the DGST, allowed the arrest of the alleged “emir” of this terrorist cell who has put up a fierce resistance, which forced the elements of intervention to shoot sound bombs to neutralize the danger, according to the same source, noting that four other members imbued with the ideology of “takfirist”, bearers of a terrorist project across the border, were also arrested.

During the operation at the home of the leader of this terrorist cell, the elements of the Special Force have ensured the evacuation and security of family members of the suspect and neighbors to guarantee their safety and prevent all dangers that may result from a possible explosion. The search and technical sweep revealed the existence of a bottle and flasks of various volumes containing nitric acid and suspicious chemical liquids as well as nails and electrical wires and six gas cylinders suspected of being used in the manufacture of homemade explosives, the statement added.

A large “banner” bearing the emblem of the organization “Daesh” was also seized, in addition to para-military uniforms, knifes of different calibers, including sharp and blunt objects and a sword, as well as equipment and computer hardware, in addition to prints and portraits of the former leader within the jihadist group “Daesh” in the Sahel-Saharan region, Adnan “Abu Walid al-Sahrawi”.

According to the first elements of the investigation, the statement added, the members of this terrorist cell have joined a recruitment and enlistment campaign to strengthen their ranks, as well as they have acquired several products used in the manufacture of homemade explosive devices, after an internal subscription operation to collect the necessary funds, in anticipation of committing remote explosion operations to target headquarters and security personalities, as well as public places hosting Moroccan and foreign citizens.

To manufacture the devices and explosives, the cell has relied on the technical training of one of its members as a technician specializing in electricity and working in the field of installation of cameras, who conducted simulations on the manufacture of explosives based on techniquesterrorist and applications available on some extremist websites, added the same source.

The first elements of the investigation have also revealed that the emir of this terrorist cell has undertaken several contacts with top leaders of the organization “Daesh” in the Sahel-Saharan region in order to secure the resources necessary to finance his terrorist projects and ensure the supply of weapons and other logistical equipment necessary for terror operations.

The members of this terrorist cell were placed in custody to complete the judicial investigation conducted by the BCIJ under the supervision of the prosecutor’s office in charge of terrorism cases, in order to elucidate the nature and extent of the local and international ramifications of this cell and to identify all its plans and destructive projects.

The dismantling of this terrorist cell shows, once again, the persistence of the terrorist threat through the attempts of some extremist organizations to commit destructive operations that can seriously undermine public order. It also confirms the full readiness of the Moroccan security services to face these dangers and threats in order to preserve the security of the homeland and the safety of citizens, the statement concluded.