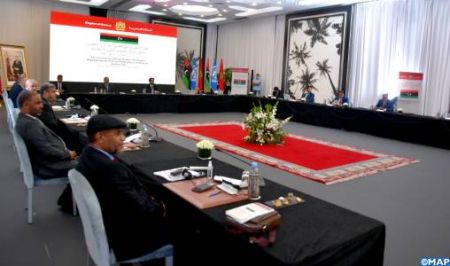 The consultative meeting between the Libyan House of Representatives and the High Council of State on the electoral law ended Friday in Rabat after two days of discussions.

During this two-day meeting, which was held behind closed doors, the two parties discussed outstanding issues concerning the organization of the presidential and legislative elections, scheduled for December 24, which are a crucial step in bringing the country out of the crisis it is experiencing after 10 years of war.

Te meeting which has been held since Thursday in Rabat between the Libyan representatives within the framework of Inter-Libyan discussions aims to agree on the constitutional bases of the next general elections in Libya scheduled for December.

This crucial meeting comes at a time the international community has made numerous statements urging for the holding of the polls at the scheduled timetable.

The participating delegations issued a statement saying the Rabat meeting on Sept. 30-Oct.1 is a continuation of the momentum created by the Skhirate agreement in 2015, adding that current talks aimed at finding common ground for holding Dec. 24 elections in a spirit of consensus.

“Talks took place in a friendly and brotherly atmosphere marked by mutual understanding and consensus,” the Libyan delegations said in a statement.

US Envoy to Libya took part in Rabat talks and voiced hope to see Libyan rivals reach an agreement in two weeks on elections.

The US Ambassador Richard Norland said that the representatives of both sides are committed to laying the constitutional foundations paving the way for the holding of these elections as planned.

The US diplomat thanked Morocco for hosting this new inter-Libyan meeting, in addition to the previous ones held in Skhirat, Bouznika and Tangier. He expressed hope that the efforts deployed by the Kingdom and the UN would lead to the voting and the formation of a unity government for the return of peace and stability to this country.

“We call on the international community to support the electoral process in Libya according to mutually-agreed laws and on the basis of the conclusions of the Libyan political dialogue,” the participating delegations said in the statement.

They also urged the international community to “guarantee abidance by the results of elections through sending international observers to oversee the good proceedings of these elections.”

The delegations expressed gratitude to Morocco for hosting the talks and for supporting the Libyan people in achieving peace and stability in Libya.

Morocco has often said that it was ready to offer Libyans conditions propitious for finding a purely Libyan solution to the current crisis without foreign interference.

Morocco has also repeatedly insisted on the need to respect the schedule “to avoid the deadlock” and warned against waiting to find “ideal” conditions, deeming that ‘they might never take place and thus block the whole positive process that the Libyan dossier has had in recent months thanks to the efforts of all Libyan parties.