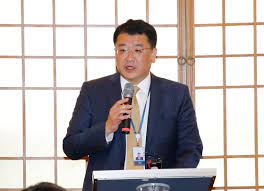 Ways of strengthening cooperation ties between Morocco and South Korea in various sectors in a post-covid world were at the centre of talks held Monday in Rabat between South Korean Vice-foreign minister Choi Jong-Kun and Moroccan minister of foreign Affairs Nasser Bourita.

In a brief statement to media following his meeting with Bourita, the South Korean minister commended the leadership of King Mohammed VI in the management of Covid-19 pandemic, stressing that his country will work with the North African Kingdom to overcome this global health crisis.

He also said that his first trip to Morocco will be followed by other visits, affirming that he is upbeat over the future of exchanges between the two countries.

Mr. Choi’s visit to Morocco is part of an African tour that will take him to Senegal and Nigeria. According to South Korea’s ministry of foreign, the three African countries are Seoul’s key partners in the continent.