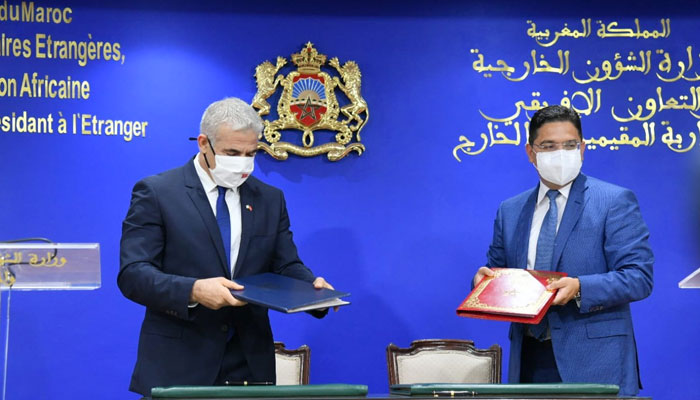 Israeli foreign minister Yair Lapid paid a two-day visit to Morocco this Aug.11-12 during which he conferred with his Moroccan peer Nasser Bourita on a series of bilateral and regional issues of common interest.

The talks highlighted by the signing of three framework agreements that covered political consultation between the ministries; cooperation in culture, youth, and sports; and air service between the two countries.

The new cooperation agreements, signed Wednesday in Rabat between Morocco and Israel, will bring innovation and mutually beneficial opportunities for both countries and for generations to come, Yair Lapid said.

“Today we are not just good politicians, but good parents. Today we are working for a safer world for our children. We are teaching them the power of hope,” Lapid said at the signing of the agreements.

Expressing his gratitude to King Mohammed VI, whose “vision and courage have enabled us to meet here today”, the Israeli official stressed the imperative of cultivating hope to transcend the hatreds inherited from the past.

He stressed that his visit to Morocco, the birthplace of a vibrant Jewish community whose origins date back to the 2nd century B.C., is part of a vision for the future based on the virtues of friendship and cooperation, particularly in the fields of tourism, the economy, trade and cultural exchanges.

Believing that nations and peoples are measured by their ability to truly consider the suffering of others, their hopes and aspirations for change, he said that the world has become much smaller as a result of new communication technologies, which are now “changing our way of thinking”.

As a result, he explained, two types of countries are emerging: those that favor collaborations and alliances, and those that are more inclined to go it alone. “There are those who know how to adapt and compete and those who try to isolate themselves. They will find that they are lagging behind,” he said.

At the ceremony, limited by COVID-19 restrictions, Lapid was accompanied by the members of his delegation, namely Welfare Minister Meir Cohen, a native of Morocco, and chairman of Knesset Foreign Affairs and Defense Committee Ram Ben Barak as well as by the Chargé d’affaires David Govrin.

After the inauguration of the Liaison Office, the foreign minister was due to spend time in Casablanca with the local Jewish community and pray at the Beth-El Synagogue there before returning back home Thursday night.

US Secretary of State Antony Blinken has welcomed the visit by the Israeli Foreign Minister in Morocco as the two countries built on the normalization agreement signed last year under a US-brokered deal.

Blinken in a statement called the visit, along with the reopening of the Israeli liaison office in Rabat, “significant for Israel, Morocco, and the broader region.”

“The United States will continue to work with Israel and Morocco to strengthen all aspects of our partnerships and create a more peaceful, secure, and prosperous future for all the people of the Middle East,” Blinken said.

At his daily press briefing Wednesday, the State Department Spokesman Ned Price on his part described the visit, as “another important step in strengthening” relations between Morocco and Israel.

“We are convinced that normalized relations between Israel and its Arab neighbors create new opportunities for peace and prosperity to flourish in the region,” Price said.

“The relationship between Morocco and Israel has already led to real benefits for both countries, including direct commercial flights, economic cooperation and the opening of liaison offices,” added the spokesman.