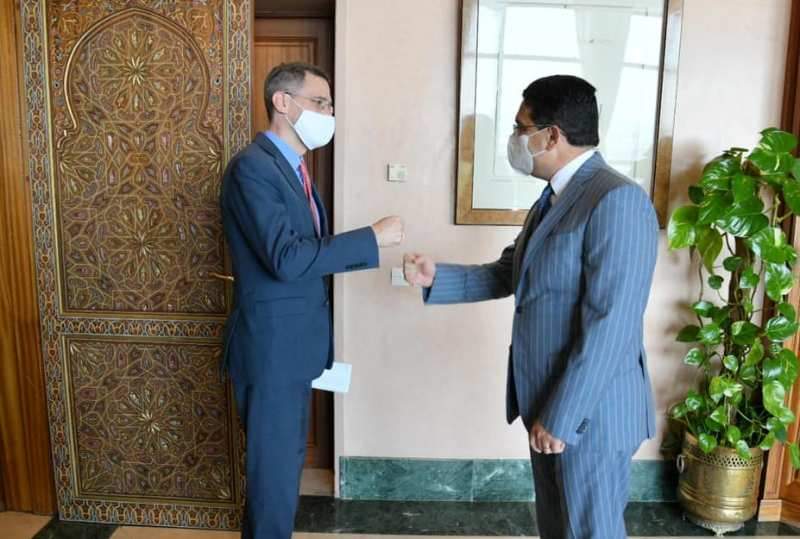 Acting U.S. Assistant Secretary of State for Near Eastern Affairs Joey Hood has affirmed that the stand of the United States on the Sahara remains unchanged, dealing a hard blow to Algeria and Polisario and their lobbyists as the Biden administration upholds the decision of its predecessor’s which recognized the Moroccanness of the Sahara.
At a joint press briefing held Wednesday in Rabat following his talks with Moroccan foreign minister Nasser Bourita, Mr.Hood said “there is no change in the U.S. position regarding the Sahara, to the great displeasure of the enemies of Morocco’s territorial integrity and sovereignty over its Sahara wherein a growing number of countries from Africa, the Arab world the Caribbean …are installing diplomatic representations in support of the North African kingdom.
Nonetheless, the Assistant Secretary of State underlined Washington’s resolve to settle this regional conflict, stressing the urgent need to appoint a new UN envoy for the Sahara.
It is worth noting that Algeria and the Polisario have rejected in total 13 candidates proposed by the UN Secretary General to fill up this vacant post since the resignation of German Horst Köhler in May 2019 for “health reasons”.
Mr. Joey Hood also welcomed the launch of direct flights between Morocco and Israel, saying the United States appreciates Rabat’s moves to improve relations with Tel Aviv.
His talks with Bourita focused on the strategic partnership and the strong historic ties existing between Morocco and the United States as the two countries celebrate the bicentennial of the Tangier American Legation, the U.S.’s oldest diplomatic property in the world.
In his official Twitter account, the senior US Department official expressed “his thanks to His Majesty King Mohammed VI for his stewardship of the U.S.-Morocco relationship, building on the work of the King’s ancestor, the Sultan Moulay Suleiman, who gifted the Legation building to the U.S. in 1821”.
He also met the same day with Moroccan minister of Industry, Trade, Green & Digital Economy Moulay Hafid Elalamy as the two countries celebrate the 15th anniversary of the US-Morocco Free Trade Agreement.
Morocco is the only country in Africa to have an FTA with the United States. Both countries have benefited from this agreement which contributed to the creation of thousands of jobs and a five-fold increase in the volume of trade to $5 billion annually.