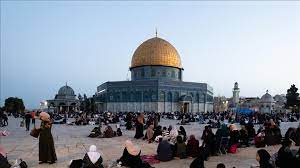 UN Secretary-General Antonio Guterres is worried about the tensions around the Al-Aqsa Mosque in the Old City of Al Quds and calls on political leaders in the region to refrain from any provocative action, UN spokesman Farhan Haq said in a press briefing on Monday.

On Sunday, Israeli security forces fired gas and rubber bullets at Palestinian protesters to empty the Al-Aqsa Mosque shrine for Jewish visitors, who refer to the place of worship as the Temple Mount.

“The Secretary-General is following with concern the heightened tensions in and around the holy sites of the Old City of Al Quds. He underscores that the status quo must be upheld and fully respected,” Farhan Haq said.

“He calls upon community, religious and political leaders on all sides to refrain from provocative action and rhetoric in the interest of peace and stability,” the spokesman added.