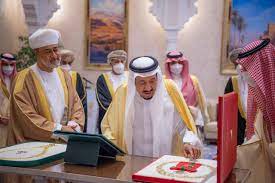 Oman’s ruler Sultan Haitham bin Tariq Al Said landed Sunday in Saudi Arabia for his first trip abroad since ascending to the throne last year, as both countries beef up their economic ties.

The Omani ruler held talks with King Salman in the city of Noam, a futuristic desert city planned along the kingdom’s Red Sea coast.

Both leaders oversaw the signing of a memorandum of understanding (MoU) on establishing the Saudi-Omani Coordination Council.

“The visit comes within the framework of strengthening the historical and fraternal relations between the leaderships of the two countries,” the Saudi Press Agency (SPA) said.

“It also aims to expand the prospects of joint cooperation and ways to develop them in various fields for the interest and steady progress of the peoples of the two countries.”

The two countries, the agency notes, are poised to “strengthen the deep historical bonds” between the two countries, “and to explore new areas of cooperation — particularly in the fields of trade, infrastructure and development.”

The number of Saudi companies, institutions and individuals investing in Oman had reached 1,235, and the number of Omani companies in the Kingdom reached 320 by the end of the second quarter of the year, the kingdom has also indicated.

The two countries also look to integrate their respective visions, 2030 (Saudi Arabia) and 2040 (Oman), to create several promising investment opportunities in a number of sectors.