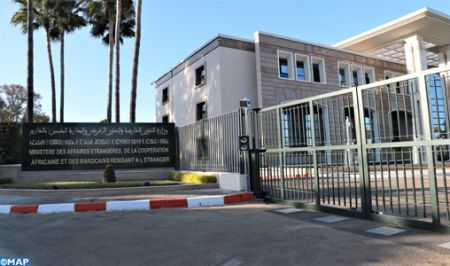 Morocco has never instrumentalized separatism in its international relations and particularly in its relations with its neighbors.

The remarks came in a long statement released this Monday May 31 by the Moroccan Foreign Ministry on the crisis between Morocco and Spain that flared up after Madrid had deliberately allowed entry to its territory, in a duplicitous and secret way, of the Polisario separatists’ leader Brahim Ghalim, although he was prosecuted by the Spanish justice for different serious charges including genocide, torture, illegal detention, kidnapping, and rape.

Ghali had been allowed entry in Spain in April under the name of Mohamed Ben Battouche and with a fabricated Algerian passport, in connivance between Spanish and Algerian authorities at the highest level.

Morocco has always shown solidarity with Spain, said the Foreign Ministry listing a number of events where the North African Kingdom actually showed solidarity with its northern neighbor.

“There are, of course, natural difficulties linked to neighborhood, including cyclical migratory crises. However, these difficulties should never make us forget that solidarity is to partnership what reliability is to neighbourliness and what trust is to friendship,” the ministry explained.

Recent history teaches us that there have been numerous actions in this regard. In 2002, for example, following the sinking of an oil tanker, Morocco graciously opened its territorial waters to 64 fishing vessels, belonging to the region of Galicia, while the fishing agreements were not yet concluded, it added.

In 2008, when Spain was in the midst of an economic crisis, Morocco granted exemptions to welcome with open arms and allow the installation and activity in Morocco of Spanish workers and entrepreneurs, it recalled.

“In the midst of the Catalan crisis, Spain has always been able to count on Morocco, which defended, without reservation, its national sovereignty and its territorial integrity, through actions (ban on entry of Catalan separatists into Morocco, ban on all contact between Consulate of Morocco in Barcelona and the Catalan separatist movement) and positions (clear and strong support statements),” it emphasized.

“It is in the name of this coherence towards itself first and then towards its partners that Morocco has never instrumentalized separatism. It has never used it as a card in its international relations, and particularly with its neighbors.”

In this regard, Morocco’s policy towards Spain has always been crystal clear, the ministry insisted, recalling that during the Catalan crisis, Morocco did not choose neutrality; it was among the very first countries to stand firmly, clearly and strongly, on the side of the territorial integrity and national unity of its northern neighbor.

The same solidarity spirit has always prevailed in security cooperation and the fight against illegal migration. Thus, migration cooperation has enabled, since 2017, the abortion of more than 14,000 irregular migration attempts, the dismantling of 5,000 trafficking networks since 2017 and the prevention of countless assault attempts, it noted.

Cooperation in the fight against terrorism has enabled the dismantling of several cells, with ramifications both in Morocco and Spain and the neutralization of 82 terrorist acts, the ministry said, recalling the decisive contribution of the Moroccan services in the investigations carried out following the bloody attacks in Madrid in March 2004.

How after all this, can we seriously talk about threats and blackmail in connection with the statement of the Moroccan Ambassador in Madrid? the ministry said, adding that “frankness has never been a threat, and the legitimate defense of positions cannot be equated with blackmail.”