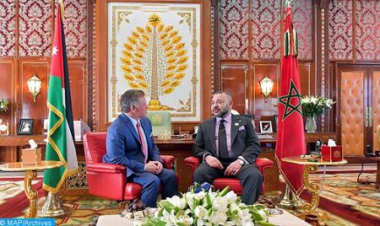 King Mohammed VI held a phone call this Sunday with King Abdullah II of Jordan during which he reassured him of Morocco’s full support for the stability and security in Jordan, a statement from Morocco’s royal office said.

King Mohammed VI, who was the first foreign leader to call the Jordanian Monarch, enquired about the situation in Jordan following reports of an attempted coup d’Etat.

The King renewed his full and “natural” solidarity with King Abdullah II and expressed support for all of his decisions to ensure stability and security in his country.

The Moroccan foreign ministry also issued a press release reiterating Morocco’s support for the Jordanian King and his actions to preserve the stability and security in Jordan.

On Saturday, authorities in Jordan announced their decision to arrest 20 people, including high-profile officials.

Jordan also limited the movement of Prince Hamzah bin Hussein, King Abdullah’s half-brother Hamzah who served as a crown prince for four years before the designation was passed to Abdullah II in 2004, for his alleged involvement in a plot seeking a coup d’etat and a security sweep.