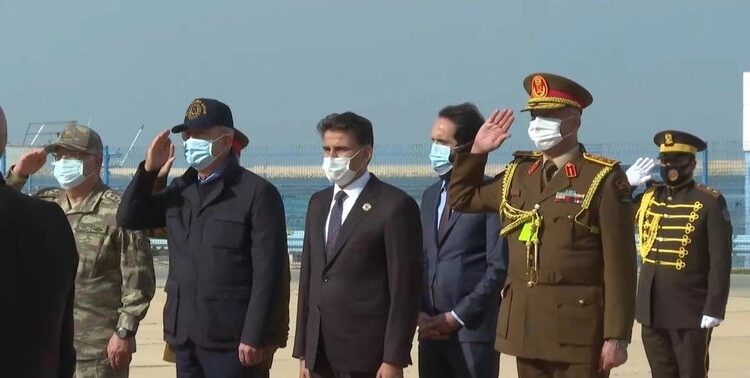 Libyan Prime Minister Abdel Hamid Dbeibah and his national unity government, which will manage the transition until elections are held on December 24, were sworn in on Monday, March 15. Abdel Hamid Dbeibah was appointed amid accusations of corruption more than a month ago, on February 5, as part of a U.N.-sponsored political process to lead Libya out of a decade of chaos and violence.
Prime Minister Abdel Hamid Dbeibah, his 32 ministers and 2 deputy prime ministers vowed to “preserve the unity, security and integrity” of Libya.
Initially scheduled to take place in Benghazi, the cradle of the revolt that brought down Muammar Gaddafi’s regime in 2011, the inauguration ceremony was finally held, for logistical reasons, at the provisional headquarters of the parliament, which was set up in the port city of Tobruk in 2014, 1,300 kilometers east of the capital Tripoli.
Several ambassadors as well as the president of the Libyan parliament were present. A large security detail was deployed in the city.
For years, the country has been split into two camps, namely the UN-recognized Government of National Unity (GNA) of Fayez Sarraj in the west and the internationally unrecognized parallel cabinet of Abdallah al-Theni in the east, a region controlled by the forces of Field Marshal Khalifa Haftar. Neither Fayez Sarraj nor Abdallah al-Theni were present at the swearing-in ceremony on Monday.
Abdel Hamid Dbeibah and his transitional government have officially taken office in a country that is still plagued by power struggles, the weight of militias, the presence of foreign fighters and corruption. They will have the onerous task of organizing elections at the end of the year, but also of trying to turn around the economy and unify the institutions.
They will also have to ensure the departure of the 20,000 foreign mercenaries still stationed in Libya.
The new national unity government won a “historic” vote of confidence from members of parliament last Wednesday.
On Friday, the UN Security Council called for “the withdrawal without further delay of all foreign forces and mercenaries from Libya.