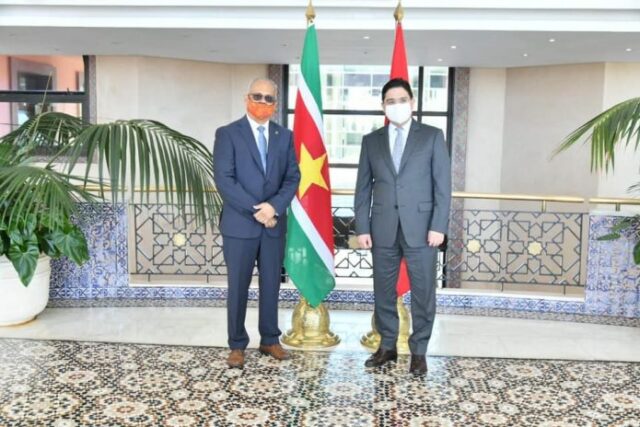 The Republic of Suriname has decided to open an embassy in Rabat and a consulate in Dakhla, in order to give impetus to bilateral relations and cooperation with Morocco.

The announcement was made by visiting Surinamese Minister of Foreign Affairs, Albert Ramdin, at a press briefing on Thursday in Rabat.

The Surinamese top diplomat said he had discussed with his Moroccan peer Nasser Bourita the opportunities to develop b2b relations between the two countries, with a view to strengthening bilateral trade within the framework of South-South cooperation.

Ramdin noted that since the establishment of diplomatic relations between Morocco and Suriname, in July 2004, the partnership between the two countries has significantly evolved.

He said it has been agreed during his talks with Bourita “to deepen political dialogue, renew bilateral ties and share views on regional and multilateral cooperation.” This collaboration is an essential element of South-South cooperation, solidarity and mutual respect between the two countries, he said.

During their talks, the two officials established a 2021-2024 cooperation roadmap, meant to consolidates the excellent and friendly relations existing between the two countries.

Regarding the regional dispute over the Moroccan Sahara, Ramdin reaffirmed his country’s support for the territorial integrity of Morocco and its unshakeable stand concerning the Moroccanness of the Sahara and the sovereignty of Morocco over its southern provinces.

“The government of the Republic of Suriname supports the autonomy plan proposed by the Kingdom of Morocco as the sole basis for a lasting political solution to this dispute”, added the Surinamese FM.