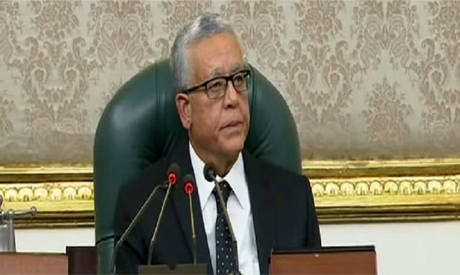 The Egyptian parliament Tuesday elected former Chief Justice of the Supreme Constitutional Court (SCC) Chancellor Hanafy Ali El Gebali as its new speaker close to President Abdelfattah al-Sisi.
71-year old Gebali obtained 508 votes out of 576 to beat his rivals; Mohamed Salah Abu Hemela, Ahmed Abdel-Hakim Youssef, and Mohamed Madina.
The vote came during the inaugural session of the Egyptian legislature of this year. Mohamed Aboul-Enein and Ahmed Saad Eddine were also elected deputies to the speaker, Ahram online reports.
The session was chaired by Farida Shobashi as the oldest member.
Gebali, nominated to the post by the National List for Egypt, which has the majority of Egypt’s 2021 parliament with up to 284 seats, held several positions including head of the SCC (2018-2019), Secretary-general for the Union of Arab Constitutional Courts between 2011 and 2018.
The former judge is a graduate from the faculty of Law at Cairo University and Ain Shams University.