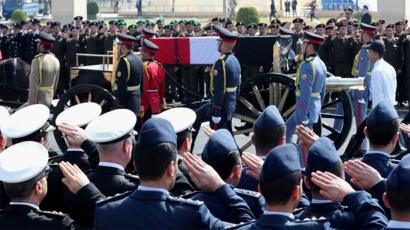 President Fattah al-Sisi this Wednesday announced three-day mourning period to pay homage to former leader Hosni Mubarak who passed away Tuesday at the age of 91.

The 91-year old late leader was buried in his family cemetery in eastern Cairo.

Bahrain and the UAE also announced they would raise their flags at half-mast for one day in homage to the military man who ran the most populated Arab country for 30 years.

Mubarak died nine years after he was forced to resign from power during the popular uprising in January 2011.