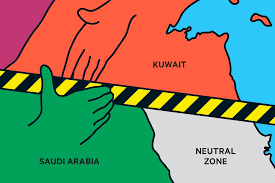 Saudi Arabia and Kuwait have signed Tuesday an agreement on the resumption of shared production from both on-shore and off-shore oil fields situated in the Partitioned Neutral Zone (PNZ).

The agreement divides the Neutral Zone between the two countries and a memo of understanding provides for the resumption of joint oil production along the border.

According to Asharq Al-Awsat daily, the Saudi official indicated that the resumption of production will be gradual and that by the end of 2020, it will reach about 325 thousand barrels per day.

Prince Abdulaziz bin Salman added that the implementation of projects in the Dorra gas field will be soon indicating that there are companies that have the ability to start these projects, indicating that the region is promising and contains large quantities of gas, the Saudi Press Agency reported.

The US has welcomed the Saudi-Kuwaiti agreement, pointing out that the two countries’ renewed commitment to pursue joint activities related to the exploration and production of oil and gas in the PNZ will benefit both countries and strengthen commercial ties between the region and the US, the US embassy in Kuwait said in a press release.