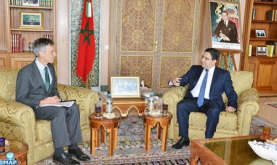 The second Morocco-UK Strategic Dialogue was crowned with announcement of a joint taskforce to explore how the UK and Morocco can increase investment in each other’s economies and the signing of a Memorandum of Understanding (MoU) to create the Joint UK-Morocco High Commission on Education.

This Commission will aim to strengthen higher education and scientific research links between Morocco and the UK by the end of 2023 through increasing the number of students travelling to each other’s countries to study, increasing access to UK teaching and qualifications in Morocco, and encouraging joint research projects to address key national and global challenges.

The Moroccan and British ministers praised the progress made since last year’s Strategic Dialogue in London, where the signing of the UK-Morocco Education Agreement was the first step towards the opening of the first British School in Marrakesh later this year, which will allow parents and children across Morocco to access high-quality British education.

The meeting also discussed the new agreement between the UK and Morocco, which will replace the existing EU-Morocco free trade agreement once the UK leaves the EU and allow businesses to continue trading freely.

Speaking on this occasion, Secretary of State to Foreign Affairs Mounia Boucetta, said that the meeting reflects the willingness of both countries to strengthen their long-standing ties. Morocco views Britain as a true strategic partner, she said, recalling the visit Prince Harry and his spouse paid to Morocco and their meeting with King Mohammed VI.

She also hailed the significant development of the bilateral political dialogue during this year, commending UK’s “constructive” stand at UN Security Council and its support for a political settlement of the Sahara issue.

For his part, Dr. Murrison said the UK-Morocco Strategic Dialogue is an important meeting that demonstrates the depth and breadth of the friendship between the UK and Morocco.

“As we prepare to leave the European Union, it’s vital we continue to work closely alongside our valued international partners. I look forward to seeing the UK’s relationship with Morocco go from strength to strength”, added the minister.

Talks also covered the Africa Investment Summit, to be held in London on 20 January 2020 with the participation of Morocco, the forthcoming military cooperation that includes a joint military exercise in October and the British cultural events planned in Morocco in the coming months. These include the first ever visit to Africa of the Royal Household Cavalry for the Salon du Cheval; the presence of the British Showjumping team at the Maroc Royal tour; and the Welsh National Opera’s first visit to Morocco in December.