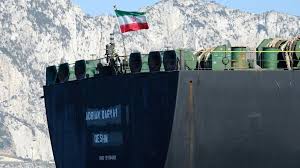 An Iranian oil supertanker seized by the UK, which triggered an altercation between Tehran and the West, moved away from Gibraltar on Sunday where it had been impounded for over a month, Spanish state TV reported.

The Adrian Darya, formerly known as the Grace 1, set sail under an Iranian flag to an undisclosed location, despite a warrant issued by a US federal court for the seizure of the tanker on grounds that it violated international law.

The European Union Monday welcomed the move as part of efforts to de-escalate tensions in the Strait of Hormuz.

“We take note of the decision of the government of Gibraltar. We welcome all efforts to de-escalate tensions in the region,” an EU spokesperson for foreign affairs Carlos Martin Ruiz de Gordejuela told a news conference, Kuna reported.

“We are following developments very closely. We are in regular contacts with the countries in the region to de-escalate the situation and seek ways to contribute to confidence building,” he said.

Discussions are continuing on a solution to help increase maritime security in the Strait of Hormuz, he said, adding that it would be unwise at this stage to speculate on the tools and means for such a solution.

According to media reports, the Iranian tanker Grace 1 has left the port after Gibraltar rejected a request by the US to seize the ship, which has changed its name to Adrian Darya-1.

The ship was seized with the help of British marines on July 4th, after the government of Gibraltar accused the Iranian ship of carrying oil to Syria in breach of EU sanctions.