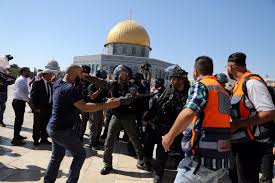 Speaker of the Kuwaiti parliament has called for international support for the Palestinians a couple of days after Israeli forces brutalized Palestinians at Al-Aqsa Mosque on Eid Al-Adha.

Israeli forces intervened to clamp down on Palestinians who were protesting the intrusion of hundreds of religious Israeli Jews allowed by the Israeli authorities to enter the site, reports say. Sunday coincided with Jewish fast day of Tisha B’Av.

Several Arab and Muslims-dominated countries condemned the invasion branded as aggression. Saudi Arabia as well as Qatar slammed the move by the Israeli forces.

Marzouq Al-Ghanim, speaker of the Kuwaiti parliament, sounded the alarm and lambasted calls for peace that he also branded “false”.

“The brutal attacks committed by the Zionist occupation forces against worshippers in the courtyards of Al-Aqsa Mosque, on the morning of Eid Al-Adha once again prove the collapse of false calls for peace, and empty settlement projects, with an occupying entity that knows only the logic of oppression and force,” he said.

“It is shameful and disgraceful to leave Palestinians to face the enemy alone without support and backers,” he said.

Ghanim is well known for his staunch support for Palestinians. In 2017, he confronted an Israeli delegation during the Inter-Parliamentary Union (IPU) conference held in Russia, over Israeli’s continued brutalization of Palestinians and raid on the Al-Aqsa Mosque.

“You should pack your bags and get out of the hall after you saw the reactions of the world’s honorable parliaments,” he said at the time.

“Get out of the hall right now if you have an atom of dignity … You occupier, child killers.”
“I say to the brutal occupier, if you do not feel shame, then do as you please.”

The Kuwaiti official was welcomed as hero back home for his reaction.