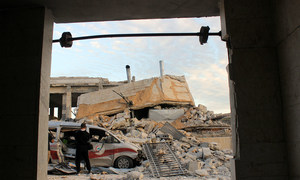 July had seen another “devastating week” for children living through conflict and instability in the Middle East and North Africa, with killings and other violent acts committed against them, on a daily basis.

This sobering assessment was delivered on Friday by Henrietta Fore, the head of the UN Children’s Fund, UNICEF.

She cited an attack on schools and a hospital in Libya’s capital, Tripoli; the killing of four students shot to death during a demonstration in Sudan; and an attack in Yemen which killed four children and injured 14.

The UNICEF chief also mentioned ongoing heavy violence in Syria, which has killed or injured 359 children since the start of the year, and 477 children injured in Palestine so far in 2019.

“Those who perpetrate this violence are failing children and falling far short of their obligations under international law to keep them out of harm’s way”, said Ms. Fore. “This is more than regrettable, it is an outrage.”