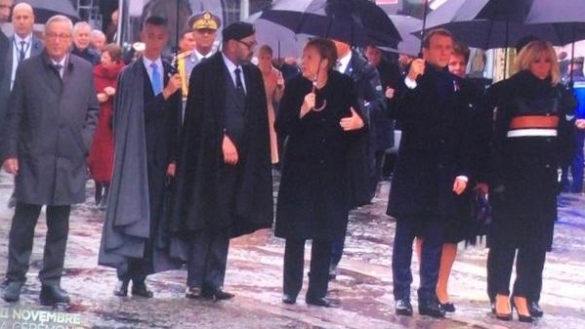 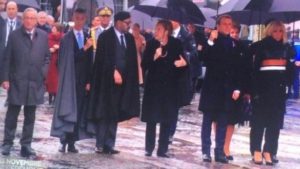 King Mohammed VI, accompanied by Crown Prince Moulay El Hassan, has joined some seventy Heads of State in Paris to commemorate the centenary of the Armistice of World War I signed on November 11, 1918.

The Moroccan Sovereign’s participation in the Armistice commemoration ceremonies sends a strong message to the international community and brings back to minds Morocco’s unwavering commitment to world peace and stability and its tireless efforts to promote multilateralism and defense of the universal values of democracy, freedom and equality.

Likewise, the Sovereign’s participation stands out as a token of the centuries-old friendship binding Morocco and France, brothers in arms.

The commemoration ceremonies, meant to be, as put by President Emmanuel Macron, a ceremony of regained brotherhood, are also an opportunity to remember the sacrifice of all the soldiers of different nationalities and faiths who participated in this war, for the triumph of these universal ideals of democracy, freedom and equality.

And among these soldiers, there were many Moroccans who contributed to Moroccan-French history at the price of their life, setting the stage for a deep, long-lasting friendship.

The Sovereign’s participation in these ceremonies is thus a political tribute to the valiant Moroccan soldiers who had fought for the ideals of freedom and peace during the First World War and also during the Second World War.

After the ceremony that took place at the renowned Arc de Triomphe in Paris, the seventy attending heads of state were invited to a luncheon at the Elysée.

In the early afternoon, they will take part in the Paris Peace Forum, organized part of the Armistice centenary commemoration.

The forum is intended to reaffirm the importance of multilateralism and collective action to build the future of a world where humanity and peace prevail.

The Forum, designed as a response to the rising tensions marking the contemporary world, aims also to be a showcase of all the cooperative advances in the fields of peace and security, environment, development, new technologies and inclusive economy. It brings together project leaders from around the world, political and economic leaders, all the actors of civil society (companies, NGOs, foundations, think tanks, media, unions, religious representatives, philanthropists, experts…) and all stakeholders in global governance.