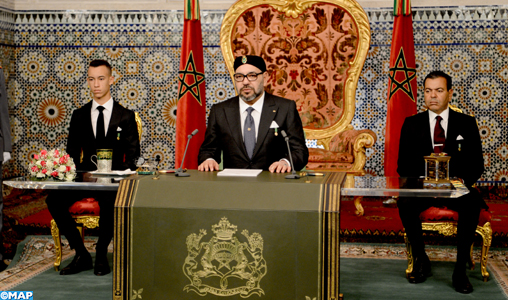 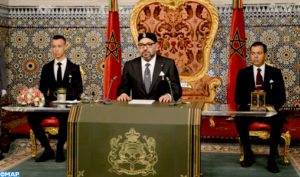 King Mohammed VI has reached out to Algeria saying that Morocco stands ready for a direct and candid dialogue in order to dispel the transient and objective differences that are impeding the development of relations between the two neighboring countries. The Sovereign also suggested the setting up of a joint political mechanism for dialogue and consultation to break the stalemate in bilateral relations, reiterating his commitment to work hand in hand with the Algerian brothers.

In a powerful speech marking the 43rd anniversary of the Green March, on November 6, King Mohammed VI said “I should like to say today, in a very straightforward and responsible way, that Morocco stands ready for a direct and frank dialogue with our sister nation, Algeria, in order to settle the transient and objective differences impeding the development of relations between the two countries”.

The Sovereign who pointed out that “we must be realistic and admit that the state of our bilateral relations is not normal, much less acceptable,” recalled that soon after he acceded to the throne, he asked earnestly and in good faith that the borders between the two neighboring countries be opened and that Moroccan-Algerian relations be normalized.

To mend relations, the Sovereign suggested that Morocco and Algeria set up a joint political mechanism for dialogue and consultation, whose format, nature and level of representation can be mutually agreed upon.

“I should like to stress that Morocco is willing to consider the proposals or initiatives Algeria may want to offer in this regard so as to break the stalemate in the relations between the two neighbors and sister nations,” he said, explaining that the mission of this mechanism “would be to analyze all the issues on hand in good faith and in a very frank, objective and honest way, using an open-ended agenda, without conditions or exceptions”.

“This mechanism can also serve as a practical platform for cooperation regarding all bilateral matters, particularly with respect to making the most of the numerous development opportunities existing in the Maghreb region,” he said.

The Sovereign explained further that this mechanism will also contribute to enhancing bilateral coordination and consultation and help us rise to regional and international challenges, particularly in terms of fighting terrorism and addressing the issue of migration.

“I should like to reiterate, in this regard, my commitment to work hand in hand with my brothers in Algeria, making sure their national institutions are fully respected,” he said, vowing that Morocco will spare no effort to build bilateral relations on the solid foundations of trust, solidarity and neighborliness.

The Moroccan Sovereign deplored the division and lack of unity in the Maghreb, saying this unreasonable situation is “utterly inconsistent with the brotherly bonds uniting our peoples, who share the same religion, language, history and destiny”.

This reality is at odds with the ambition that induced the generation who fought for freedom and independence in a bid to achieve the unity of the Maghreb, as symbolized by the Tangier Conference of 1958, the Monarch stated.

He recalled in this regard the Kingdom’s support to the Algerian Revolution, which strengthened the bonds between the Moroccan Monarchy and the Algerian Resistance.

“Together, we fought colonial rule for many years until independence was obtained. We know each other very well, and many Moroccan and Algerian families are united by the bonds of marriage and kinship”, said the Sovereign, noting that the interests of Maghreb people are best served by unity, integration and complementarity. “There is actually no need for third-party mediation,” he said.

In his speech, King Mohammed VI also dealt with the Sahara issue, one of the thorny issues in Moroccan-Algerian relations, making it clear that Morocco continues to safeguard its territorial integrity “with clarity, ambition, responsibility and committed action, both domestically and at the United Nations”.

This clarity can be shown by the firm, resolute manner in which “we have been tackling all transgressions – whatever their origin – aimed at undermining Morocco’s legitimate rights or departing from the frame of reference agreed for the settlement process”, said King Mohammed VI.

The King who renewed Morocco’s resolve to cooperate with the UN Secretary-General and to support his Personal Envoy to establish a serious and credible political process, called for setting a new dynamic in the UN-led negotiations. The United Nations, he said, should take into account the experience and the lessons of the past to avoid the deadlock of the Manhasset process.

Underlining the development efforts made in the Sahara Provinces, the King said that Morocco will invest in effective, wealth-generating economic partnerships with all countries and economic blocs, including the European Union. He made it clear, however, that Morocco shall not be involved in any partnership that undermines the country’s territorial integrity.

“I am keen to make sure these partnerships benefit directly the inhabitants of the Moroccan Sahara first and foremost, and that they contribute to improving their livelihoods within their homeland, in an environment characterized by freedom and a dignified life,” the King said.

Touching on Morocco’s return to the African Union, its institutional family, the Sovereign said this return was not intended as a means to defend the question of the Moroccan Sahara, given that the position of most African nations is similar to that of the Kingdom.

“Our return to the African Union was dictated by the pride we take in belonging to Africa, as well as by our commitment to share in the development dynamic it is witnessing and to contribute to tackling the various challenges facing the Continent, without compromising our legitimate rights and best interests,” the Sovereign pointed out.

The Southern Provinces will carry on progress under the new development model to enable the Moroccan Sahara to play once again its historical role as a bridge between Morocco and sub-Saharan Africa, the Sovereign went on to say.