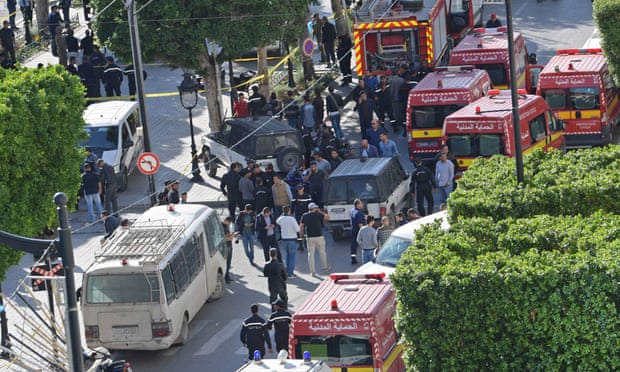 A 30-year old woman blew herself up Monday in central Tunis leaving twenty people, including 15 police officers and three civilians and two children, injured, in the first major terror attack witnessed by the country since 2015.

An explosion rattled the central Habib Bourguiba avenue. The subside bomber, a 30-year old woman, is not known by authorities for being member of any terror group.

The attack is the first in three years following a string of terror assaults in the capital and in the much visited Sousse city.

In Mars 2015, a commando of Islamic State group (ISIS) militants mowed down 21 people mostly foreign tourists at Bardo Museum, near the parliament in Tunis. In June, same year, 38 people among whom 30 Briton tourists died after a gunman assaulted a hotel in Sousse near the sea.

In November 2015, a subside bomber blew himself in Tunis, hitting a bus of presidential guards. Twelve members of the forces were killed.

The attacks scared away foreign tourists. Security measures including state of emergency adopted by authorities, soothed fears. The tourism sector has witnessed a rebound with more than six million foreign travelers visiting Tunisia in the first nine months of 2018, according to government data.

Arrivals rose 16.9 percent to 6.3 million in the first three quarters (Q) of this year. Tourism revenues over the period reached $1.2 billion, scoring a 27.6 rise per cent year-on-year.