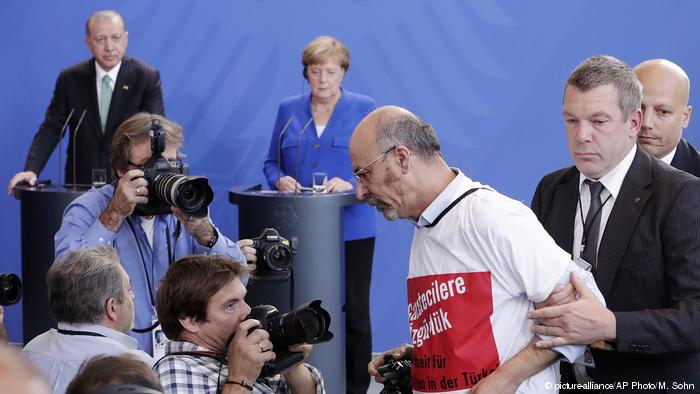 A Turkish journalist residing in Germany has said he has been asked to leave the EU country by late January next year or will be deported for what he believes is linked to his call for freedom for journalists in Turkey during a press conference held in Berlin by host Angela Merkel and visiting Turkish leader Recep Tayyip Erdogan.

Adil Yigit, who writes for the German newspaper TAZ, told German media he was informed Friday by German migration authorities to leave the EU power house by January 22.

The 60-year old journalist has been living in Germany for 36 months and believes that the decision is linked to his call for freedom for journalists in his home country during the press conference.

“The two things have to be related, there’s no other possible explanation,” Yigit told German news agency DPA.

In September, Yigit was hauled out of the press conference room for wearing a T-shirt reading “Freedom for journalists in Turkey”.

Migration authorities said the journalist Yigit is unemployed and is no longer living with his children.

Ankara has requested Berlin to hand over critics and dissidents.

Hundreds of people have sought asylum in Germany as they face arrest back home in the aftermath of the July 2016 failed military coup.

Thousands have been arrested in connection with the botched coup.