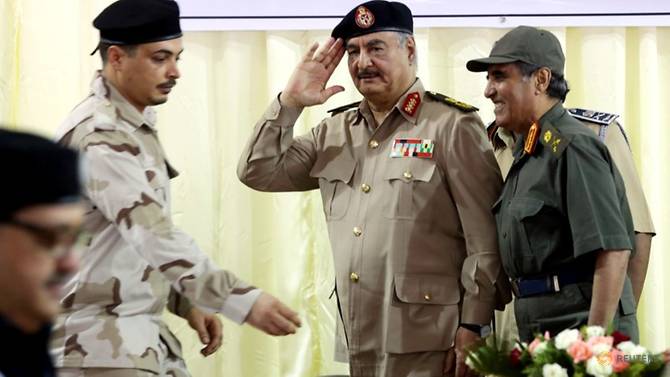 Khalifa Haftar, head of self-imposed Libyan National Army (LNA) met Monday with Italian Giuseppe Conte for talks in the buildup to an international conference in the Italian city of Palermo on the North African country.

Haftar, reports say arrived Sunday in Rome and held series of talks with Conte. The EU country is hosting on November 12-13, in Palermo, an international conference on Libya meant to come out with a peace plan that will overcome several years of political turmoil that ensued the 2011 NATO-backed revolution that toppled Muammar Ghaddafi.

Haftar who heads of East-based LNA has emerged as key player in the political life of the North African country as his army control vast swathes of the eastern part of the oil-rich country.

Libya has had two distinctive governments. The Beida government, supported by Haftar’s army, and the UN-backed Government of National Accord (GNA), based in Tripoli.

Haftar had criticized Italy for backing the GNA. Italy is reportedly seeking to win the Libyan army general’s support for the Palermo conference that Rome is planning to use to assert its role in Libya as a former colonial power.

Rome is also trying to outshine France’s efforts to snatch a consensus from Libyan political stakeholders to implement a road map that provided for elections in December this year.

Paris hosted in May four Libyan figures among whom Haftar and GNA head Faiez Serraj who agreed to endorse the December polls but the pledges are yet to bear fruits.