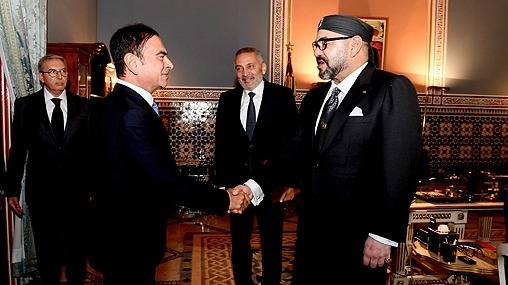 The decision by French car manufacturer Renault to produce half a million cars in Morocco is reflective of the success of Morocco’s industrialization strategy, notably in its automotive segment which has been leading Morocco’s exports since 2017.

Renault will reach the 500,000 vehicle target in Morocco after it announced a two fold increase of its production at its Casablanca factory.

Renault Casablanca will boost production from 80,000 cars currently to 160,000 cars combined with the 340,000 vehicles produced at the company’s plant in Tangier.

The decision was announced by Renault President and CEO Carlos Ghosn who was received by King Mohammed VI in Marrakech Thursday.

The trust in Morocco’s industrial potential was a result of significant investments in improving the country’s infrastructure and the business climate.

In addition to Renault, Peugeot has also set up a factory in Kenitra where production is planned to start in 2019 with a capacity of 200,000 cars annually.

The two factories will enable Morocco to reach its 2025 target of producing one million cars and generating cash worth 200 billion dirhams, according to the ministry of industry and trade.

At the continental level, Morocco has unseated south Africa as Africa’s largest car producer as many Sub-Saharan countries look forward to learning from the north African Kingdom’s success story.

The investments by Renault and Peugeot in addition to incentives from the Moroccan government have attracted leading car part makers to the country, which aspires to bring the local sourcing rate to 80%.

Morocco is actually on track to become the world’s third largest producer of aluminum wheels as it continues to attract investments by world automotive industry giants.