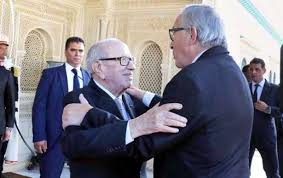 The European Commission on Thursday signed four conventions with Tunisia worth €270 million.

The agreements will support Tunisia’s energy sector, tax reform, socio-economic transformation, solidarity promotion, competitiveness and foreign trade as well as the justice system, Jean-Claude Juncker, President of the Commission who is visiting to the country said.

“European Union attaches great importance to the strategic partnership with Tunisia, especially as Europe will continue to support the Tunisian transition and contribute to its prosperity, its social stability and its economic recovery,” Juncker said.

The European Union will work with Tunisia to remove the latter from the “gray lists” of money laundering and terror financing, he said.

He told a news conference after his meeting with the Tunisian Prime Minister that a suggestion that the EU might try to set up migrant camps in North Africa was no longer on the agenda.

In June, a summit of all EU leaders asked the Commission to study ways to set up “regional disembarkation platforms’’ in North African countries, for migrants rescued by European vessels in the Mediterranean.

But all North African countries, including Tunisia, Morocco, Algeria and Libya, have adamantly rejected the suggestion.
Juncker’s visit to Tunisia comes as the country is going through a political and economic crisis over social reforms.

Since 2011 uprising, nine cabinets have failed to resolve Tunisia’s economic problems. Although struggling with high unemployment and inflation, the current government of moderate Islamists and secular forces has been running what has been hailed as the Arab Spring’s only democratic success, avoiding the upheaval seen in Egypt, Libya or Syria.

Earlier this month, the International Monetary Fund approved payment of a $247 million loan tranche to Tunisia, as part of an economic reform program for the North African country.