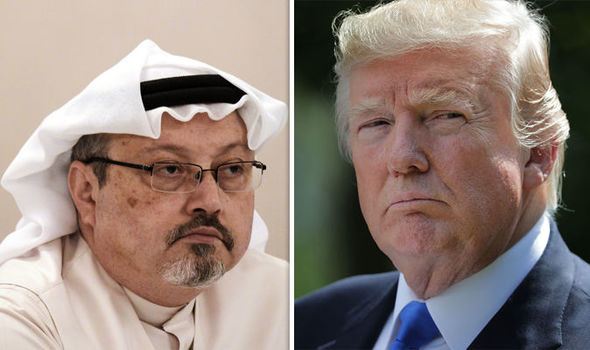 US President Donald Trump Tuesday said whoever planned the killing of Saudi and US resident journalist Jamal Khashoggi is in “big trouble”, adding that he was waiting for all facts from the CIA that he dispatched to Turkey for US-carried probe.

Earlier Tuesday, Turkish leader Recep Tayyip Erdoğan told members of the parliamentary group of his party Justice and Development (AK) that Khashoggi was killed in a “premediated” plot in which several Saudi hit men were involved. The squad was dispatched from Saudi Arabia to eliminate the 59-year old journalist who had been very critical of Saudi Crown Prince Mohamed bin Salman (MbS) and who had gone missing since October 2 after entering the Saudi consulate in Istanbul for some paperwork.

Following Erdogan’s official account of the unfolding of the investigation into the death of the journalist, who was also a contributor to The Washington Post, Trump seemed to take a tougher line on the Saudi kingdom, his key business and “counterterrorism” ally in the Middle East region.

The US leader has dispatched the director of the CIA to Turkey to discuss the case with Turkish authorities and investigators.

Erdogan, in his address on Tuesday, said Ankara is in possession of evidences while pressuring the kingdom to reveal an alleged local operator who was used to hide Khashoggi’s body.

The Turkish President also requested the extradition of suspects involved in the crime that he described as “savage”.

Saudi Arabia on Saturday admitted that the journalist died but in a dispute inside the diplomatic mission. The kingdom also announced the arrest of 18 people in connection with the killing and the firing of senior intelligence officers.

The confession came after weeks of denying, following the mounting international pressure.

Also on Tuesday, US Secretary of State Mike Pompeo said the State Department will continue to seek all relevant facts, consult with Congress, and work with other nations, and work to hold accountable those responsible for the killing of Jamal Khashoggi. The administration is also taking appropriate actions now, given the information currently available to the United States.

“We have identified at least some of the individuals responsible, including those in the intelligence services, the Royal Court, the foreign ministry, and other Saudi ministries who we suspect to have been involved in Mr. Khashoggi’s death. We are taking appropriate actions, which include revoking visas, entering visa lookouts, and other measures. We are also working with the Treasury Department to review the applicability of Global Magnitsky sanctions to those individuals,” the US top diplomat said.

These penalties will not be the last word on this matter from the United States, he said, adding that the US will continue to explore additional measures to hold those responsible accountable. “We’re making very clear that the United States does not tolerate this kind of ruthless action to silence Mr. Khashoggi, a journalist, through violence.”

These punitive measures are the first taken by the Trump administration against Saudi Arabia as pressure from the Congress increases on Trump who also said he will consult the Congress on what kind of sanctions to take against the Middle Eastern ally.