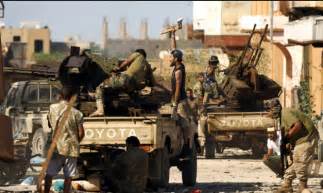 An agreement on a ceasefire in Tripoli has been reached under the auspices of Ghassan Salame, the top United Nations official in Libya, the Organization’s Support Mission in the country, UNSMIL, has announced.

Tripoli’s Meitiga International Airport, which had been closed since violence flared up, will also be opened under the deal.

The deal was signed by representatives of the Government of National Accord (GNA), military commanders, security apparatuses and armed groups present in and around Tripoli.

Scores of civilians had been killed and hundreds injured across residential areas of the Libyan capital since fighting escalated last week.

UNHCR spokesperson, Charlie Yaxley, told reporters in Geneva on Tuesday that the use of heavy weapons and shelling in civilian neighborhoods had “caused death, destruction and displacement, and is of great concern.”

According to the UN human rights office (OHCHR), a humanitarian worker – trying to evacuate civilians trapped in a neighborhood – was reportedly shot at, while one of the armed groups involved is alleged to have confiscated three ambulances.

UN agencies, such as the World Health Organization (WHO) and UNHCR, have stepped up their response, with WHO delivering trauma medicines for 200 critical cases, keeping another 2,000 more units on standby and deploying 10 mobile emergency trauma teams to areas where fighting is ongoing.

There were also reports that a migrant detention facility was hit, causing great concern over the safety of migrants and refugees.

“We are closely monitoring the situation and coordinating with the Libyan Directorate for Combatting Illegal Migration and UN agencies, and advocating for all refugees and migrants to be relocated to a safer place,” said UNHCR’s Mr. Yaxley.

According to UN reports, there are about 8,000 arbitrarily detained migrants trapped in detention centers in areas where fighting had been taking place, without access to food or medical treatment. Furthermore, there are reports that some migrants, released from detention, have subsequently been captured by armed groups and forced to work for them.