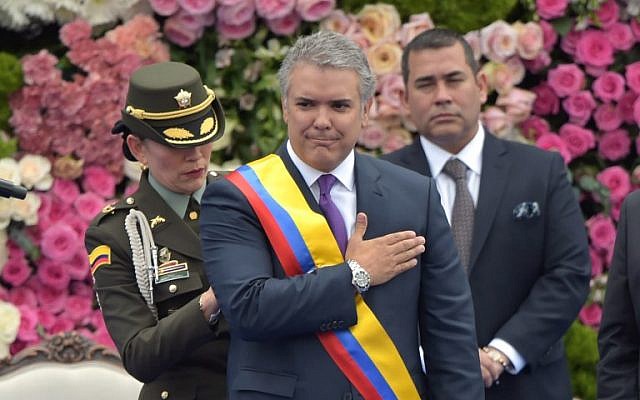 Columbia’s new President Monday said he will not reverse his predecessor’s decision to recognize Palestine as a free state despite demand by Israel that its South American ally scarps the surprising move.

“Damage was done by the fact that there was not more institutional discussion. [Former] president [Juan Manuel] Santos told me that he had made that decision, but it is irreversible,” Ivan Duque told a local radio station.

“We would have benefited from more analyses [about the pros and cons of recognizing Palestine], but we should be part of the solution, not the problem,” the new President added.

Columbia, Israel’s main ally in South America early last month, a day after Duque’s inauguration, indicated that it recognized Palestine as a free state. The decision, according to Bogota, was made by Duque’s predecessor Juan Manuel Santos.

Times of Israel notes that Duque was informed in advance of the move, which had been channeled to the Palestinian Authority (PA) in a letter.

Duque also told the local radio that “any government governs until it is replaced by its successor administration, and therefore Santos’s decision cannot be disputed and will stand.”

The Israeli Government, headed by Prime Minister Benjamin Netanyahu, did not comment on Duque’s decision to abide by Santos’s diplomatic decision which is a blow to Israel.

However Israeli Deputy Minister Michael Oren said the Colombian president’s decision not to annul his predecessor’s lame-duck recognition of Palestine was “damaging” to Israel, Times of Israeli reports.

“Even worse — the decision directly harms the peace process by giving the Palestinians free of charge what they could have received in exchange for concessions in future negotiations. So now, why should the Palestinians want to negotiate at all?” Oren said in a statement.

The decision to recognize Palestine as a free state antagonizes Duque’s previous plans, prior to his election, to transfer the Columbian embassy from Tel Aviv to Jerusalem and deepen ties with Israel.

Columbia had also abstained when 138 member countries of the United Nations supported in 2012 granting Palestine observer state status within the world body.