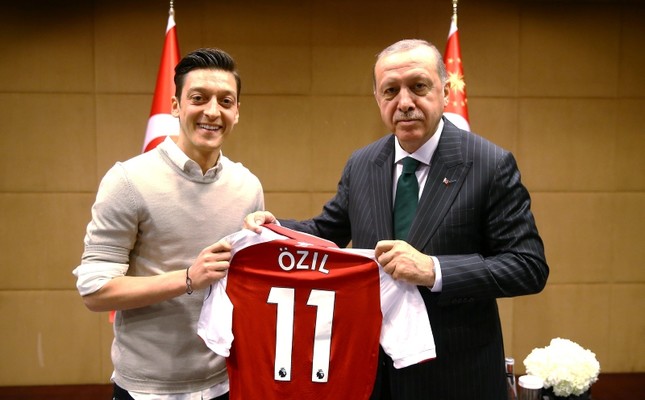 German player and London-based Premier League team Arsenal’s star Mesut Özil announced Sunday he will no longer play for Germany after he was abused by racist comments following his meeting with Turkish leader Recep Tayyip Erdoğan in May in the British capital.

“I am German when we win, but I am an immigrant when we lose. This is despite paying taxes in Germany, donating facilities to German schools and winning the World Cup with Germany in 2014, I am still not accepted into society,” Özil said in a long statement on his official social media account.

The German national of Turkish descent has come under fire since May after meeting with Erdogan in London during the Turkish leader’s official visit to England.

A picture of the two went viral on social media in Germany with racist comments leveling against the former German player maker. The May encounter between the two men was not the first. They met several times over the past, including in 2010 when Erdogan was Prime Minister. They met in Berlin with Chancellor Angela Merkel in Berlin and watched together a match between Germany and Turkey.

Özil has been charged for Germany’s early exit out of the FIFA World Cup in Russia. The 2014 World Cup winner failed to qualify for the knockout stage.

The Arsenal star defended his meeting with Erdogan noting that not meeting the recently reelected Turkish President “would have been disrespecting the roots of my ancestors, who I know would be proud of where I am today.” He also stressed that his talks with Erdogan usually focus on one topic: football.