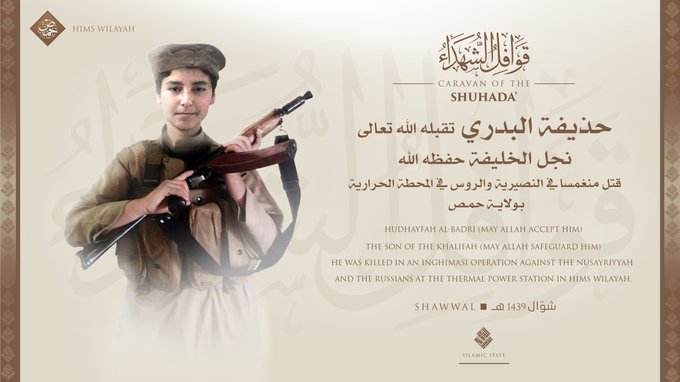 One of the sons of Abu Bakr al-Baghdadi, leader of the Islamic State group (ISIS), has been reported dead in the city of Homs, the group’s media mouthpiece reported on Tuesday.

The son identified as Hudayfah al-Badri died in suicide attack against “the Nusayriyyah and the Russians at the thermal power station in Homs.”

Nusayriyyah refers to Syria’s Alawite community that includes Bashar Assad’s family and the Syrian regime elite. Alawite is an offshoot of the Shiism.

ISIS is still posing resistance in Homs despite progress of Assad-aligned forces supported by Russian forces.

Hudayfah holding a rifle appeared on a poster published online by the terror group. The poster did not mention the age of the killed terrorist.

Al-Badri has not been seen in public or videos. Lack of information on his whereabouts have given rise to speculations about his death.

He was last heard in an undated 46-minutes audio recording released via the Al-Furqan news organization, Reuters reports.