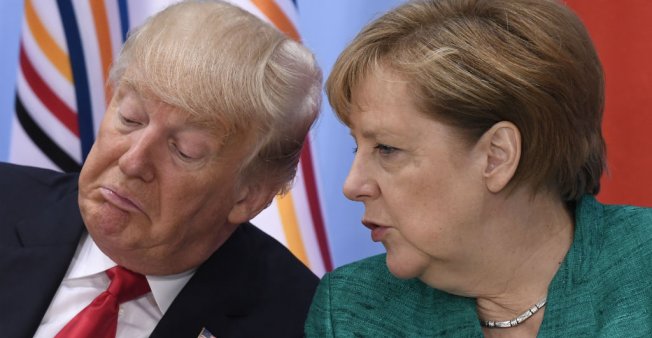 German Chancellor Angela Merkel Thursday called for solutions to Iran’s ‘aggressive tendencies’ in the Middle East region, though Germany struggles to salvage the 2015 nuclear deal in state of despair following US pullout.

Merkel, who was on a visit to Jordan where she met King Abdullah II, said European countries share US President Donald Trump’s concerns over Iran’s ballistic missile program.

“Iran’s aggressive tendencies must not only be discussed, but rather we need solutions urgently,” she said after meeting the Jordanian monarch.

“You live not just with the Syria conflict, but also we see Iran’s activities with regard to Israel’s security and with regard to Jordan’s border,” she said.

President Trump in May walked away from the 2015 nuclear accord, requesting that Teheran curbs its nuclear enrichment program.

Trump lambasted the deal arguing that it was seethed with flaws including failure to control Iran’s ballistic missile program that he said was destabilizing the region.

Iran is a staunch supporter of the Palestinian Islamist movement Hamas, the Lebanese Shia movement Hezbollah and the Yemeni Houthi rebel group.

Israel too has been complaining about Iran’s regional influence namely in Syria where it has been deeply rooted as it continues backing the embattled regime of President Bashar al-Assad.

Despite sharing the concerns of Israel and the United States, Merkel and other European leaders, namely United Kingdom’s Theresa May, and France’s Emmanuel Macron, are keen on protecting the Trump-loathed deal.