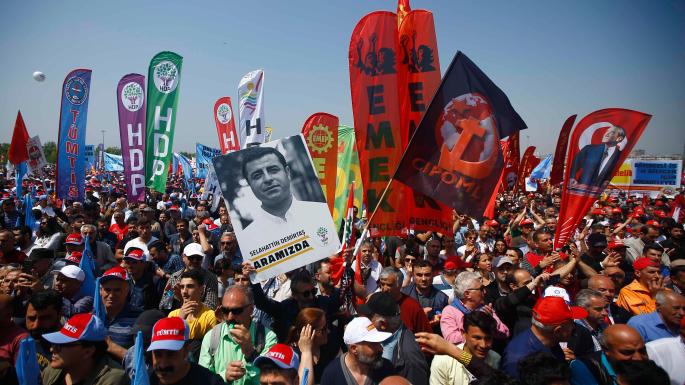 Selahattin Demirtas of the Peoples’ Democratic Party (HDP) in a video clip recorded from prison and aired on TRT addressed supporters for the first time since his arrest for terror-related charges.

Demirtas has been in jail pending trial since November 2016 on security charges. He could face a sentence of up to 142 years if convicted, Reuters reports.

In the video recorded from his prison cell in the northwestern city of Edirne, Demirtas, the pro-Kurdish opposition leader, told supporters that he was victim of slander campaign by ruling AKP party of President Tayyip Erdogan.

“The only reason I am still here is that the AKP is scared of me. They think tying my hands here and going from square to square spreading accusations about me is being courageous,” he said.

“They are openly violating the constitution by declaring me guilty even though there is no conviction ruling against me. they are trying to direct the public by misinforming them,” he said.

The video clip aired on state-controlled TRT is the second recorded by Demirtas as part of the campaign process ahead of June 24 presidential polls. The elections law allows candidates to address wherever they are the nation and present their agenda.

The address was screened in Turkey’s second city Istanbul where the HDP supporters gathered to watch their leader. Demirtas announced his liberation if the judiciary stays true to law.

“You should have no doubt that I will be acquitted in front of the law as soon as possible. So long as the judicial authorities follow the superiority of the law and not the government’s expectations,” Demirtas told his supporters.

President Erdogan who is predicted to win the coming polls will also face Muharrem İnce from the Republican People’s Party (CHP).